"The Wonder Years" is an American television comedy-drama created by Neal Marlens and Carol Black. It ran on American Broadcasting Company/ABC from 1988 through 1993. The pilot aired on January 31, 1988, following ABC's coverage of Super Bowl XXII.

The show achieved a spot in the Nielsen ratings/Nielsen Top 30 for four of its six seasons. TV Guide named the show one of the 20 best of the 1980s. After only six episodes aired, The Wonder Years won a Primetime Emmy Award for Outstanding Comedy Series in 1988. In addition, at age 13, Fred Savage became the youngest actor ever nominated as Primetime Emmy Award for Outstanding Lead Actor - Comedy Series/Outstanding Lead Actor for a Comedy Series. The show was also awarded a George Foster Peabody Award/Peabody Award in 1989, for "pushing the boundaries of the sitcom format and using new modes of storytelling." In total, the series won 22 awards and was nominated for 54 more. In 1997, "My Father's Office" was ranked #29 on TV Guide's 100 Greatest Episodes of All Time, and in the 2009 revised list the pilot episode was ranked #43.

More The Wonder Years on Wikipedia.

Over the course of the average lifetime you meet a lot of people. Some of them stick with you through thick and thin. Some weave their way through your life and disappear forever. But once in a while someone comes along who earns a permanent place in your heart.

Growing up is never easy. You hold on to things that were. You wonder what's to come. But that night, I think we knew it was time to let go of what had been, and look ahead to what would be. Other days. New days. Days to come. The thing is, we didn't have to hate each other for getting older. We just had to forgive ourselves... for growing up. 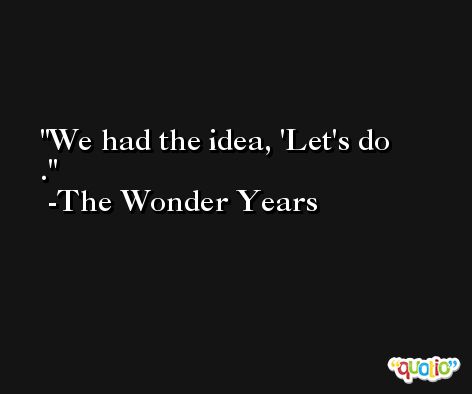 Growing up happens in a heartbeat. One day you're in diapers; the next day you're gone. But the memories of childhood stay with you for the long haul.

I guess sometimes the ground can shift between your feet. Sometimes your footing slips. You stumble. And sometimes you grab what's close to you and hold on as tight as you can. 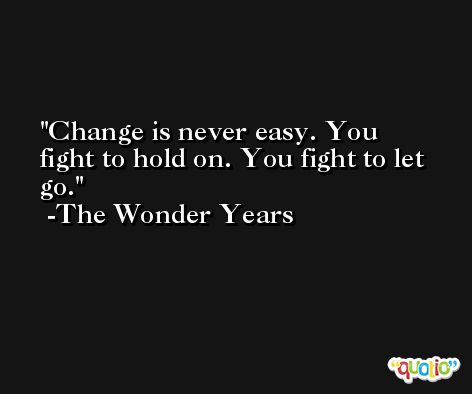