"Lon Simmons" born on July 19, 1923, in Vancouver, Washington, is an United States/American baseball and American football/football broadcaster, and is currently broadcasting part-time for the San Francisco Giants. Simmons was a star pitcher at Burbank High School (Burbank, California)/Burbank High School and Glendale Community College (California)/Glendale College before enlisting in the United States Coast Guard/U.S. Coast Guard. After World War II, he signed with the Philadelphia Phillies and pitched briefly in their minor league system.

We did a nationwide survey of tapes to find someone who could step in and do baseball when I was gone, and Bill was the guy we selected. It was obvious sooner or later that he would be doing his own thing. The broadcast business has lost a good one. It's just a shame. 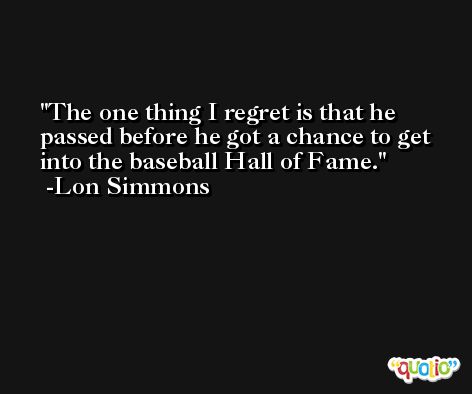 He was broadcasting the Giants from Candlestick on the final day of 1962 when they beat Houston and clinched the tie for the pennant.

Everything he did, he really got into it. He taught himself how to paint, and a lot of what he did was pretty good. ... And for me, eating is something you do three times a day because you're hungry. For Bill, dining was an adventure. He loved ethnic foods and wines. He studied that, too.