"Joseph Tate" is an United States/American Lawyer/attorney who represented government official Lewis Libby in the CIA leak grand jury investigation. Tate is a partner with the law firm Dechert/Dechert LLP in Philadelphia, Pennsylvania. He specializes in defending clients against charges of complex white collar crime, in particular, anti-trust and other regulatory issues. Previously, Tate worked in the United States Department of Justice Antitrust Division/Antitrust Division of the United States Department of Justice.

The government gave us a waiver form. Mr. Libby signed the waiver form and gave it back. I didn't talk to anyone after that.

I never once suggested that she should not testify. It was just the opposite. I told Mr. Abrams that the waiver was voluntary. 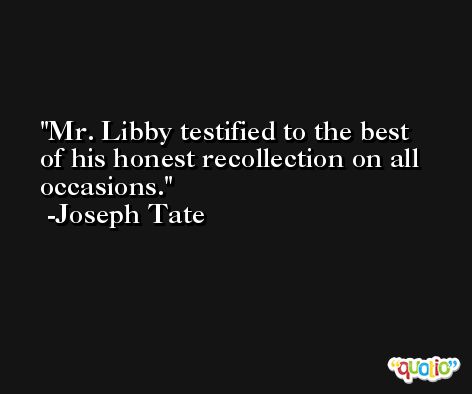 She wanted to hear it directly from Mr. Libby, and he assured her that it was voluntary.

We told her lawyers it was not coerced. We are surprised to learn we had anything to do with her incarceration.