"Eliot Laurence Spitzer" is an American lawyer, political commentator, and Democratic Party (United States)/Democratic Party politician who served as the 54th Governor of New York from January 2007 until his resignation on March 17, 2008. He most recently New York City comptroller election, 2013/ran as a candidate for New York City Comptroller, losing the Democratic nomination to Scott Stringer. His resignation as governor resulted from the aftermath of Eliot Spitzer prostitution scandal/a prostitution scandal. Prior to being elected governor, Spitzer served as New York State Attorney General. After serving as Governor, he became a political commentator, and was most recently the host of Viewpoint with Eliot Spitzer, a nightly news and commentary program on Current TV, which he later left. Prior to Viewpoint, he was the co-host of In the Arena—a talk-show and punditry forum broadcast on CNN—from October 2010 to July 2011.

If you enjoy these quotes, be sure to check out other famous lawyers! More Eliot Spitzer on Wikipedia.

Proponents cleverly wrapped the word reform around the amendment, ... But calling a mule a thoroughbred doesn't make it one.

With this agreement, virtually the entire mutual fund industry has now sworn off improper trading practices and agreed to compensate investors who were harmed. 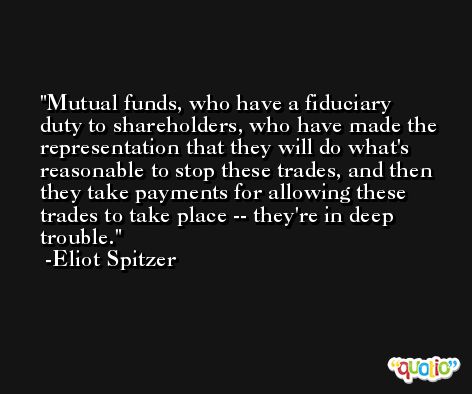 State and local regulators are the officials with the closest contact with the regulated community, ... Given their close intimate knowledge of the business they regulate, they are in a much better position than Congress to judge whether a particular small business is deserving of leniency for a first-time violation. 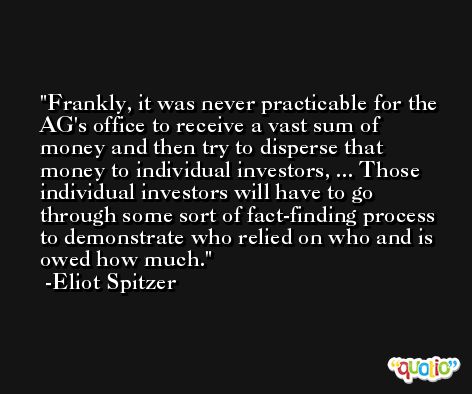 Representative Baker is an embarrassment. He is wrong on the issue of enforceability, ... His response to our settlement is explained by his failure to grasp the issues at hand and his failure to do anything to protect small investors.

It would be misguided and foolish to do so, ... It would undermine public confidence in the markets because states have historically played a critical role in restoring creditability to the marketplace. 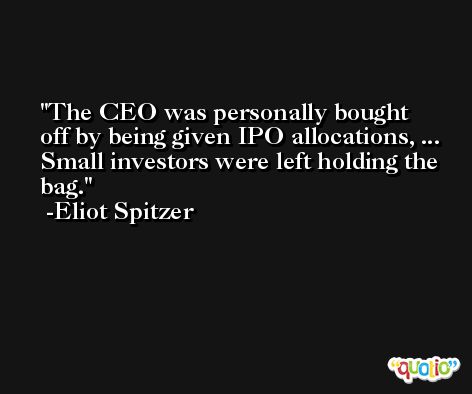