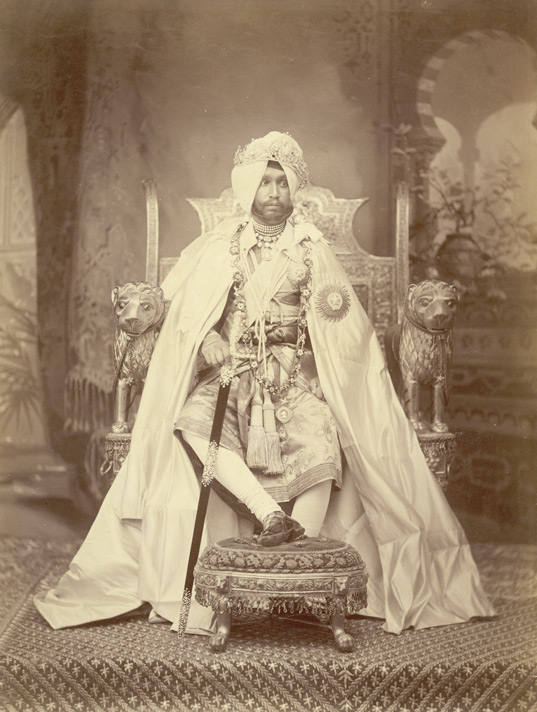 "Maharaja Sir Rajinder Singh", Order of the Star of India/GCSI was Maharaja of the princely state of Patiala from 1876 to 1900. In 1897, he was awarded the GCSI/Grand Cross of the Star of India for his bravery, by the colonial government. Described as "the first reigning Prince to blend the elements of the English gentleman and Indian potentate", he implemented reforms, including endowments for a woman's hospital, orphanages, and training of troops.

He was the first Indian to own a car, in 1892, a France/French De Dion-Bouton as well as being the first man in India to own an aircraft.[http://www.bbc.co.uk/news/world-south-asia-13627148 BBC News - Rare Indian artefacts are sold in UK auction]

Singh died following a riding accident. He was known for playing polo, cricket, field hockey and English billiards. The maharaja had a total of 365 wives, and defied his subjects and the British government when he married the Irish-born daughter of his horse master, persuading her to convert to the Sikh faith. He was a close friend of William Beresford and of Frederick Roberts, 1st Earl Roberts/Frederick Roberts. The Irish composer Thomas O'Brien Butler (1861–1915), who spent some time in India, dedicated a song composition to him.

To be frank, we were lucky to get a point. There is a lot to work to do before we play Pakistan.

Though PHL is a great thing to happen to Indian hockey, but we must not ignore the upcoming players. We need a platform for the fresh talent too because only the chosen few get a chance to compete in PHL.

It would be easy to say that I am disappointed that we did not make it, but frankly, we did not play well enough to make it.

I am very frustrated by the way the team has played.