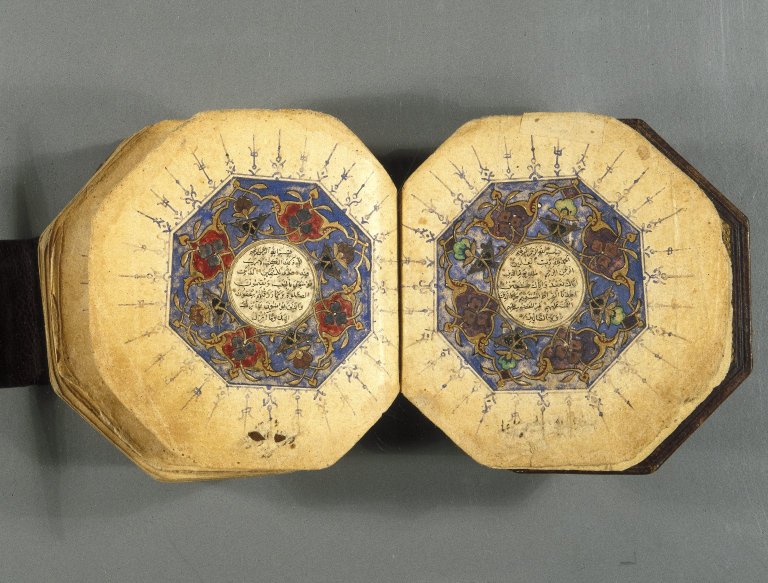 "Quran" is the central religious text of Islam, which Muslims believe to be a revelation from God in Islam/God (, Allah). Its scriptural status among a world-spanning religious community, and its major place within world literature generally, has led to a great deal of secondary literature on the Quran. Quranic chapters are called suras and verses are called ayahs.

File:Quran by Imam ali.JPG/thumb/Quran - in Mashhad, Iran - written by Ali.

Muslims believe the Quran was verbally revealed by God to Muhammad through the angel Gabriel (Jibril), gradually over a period of approximately 23 years, beginning on 22 December 609 Common Era/CE,

A good word is like a good tree whose root is firmly fixed and whose top is in the sky.

Believers, Jews, Sabaeans or Christians - whoever believes in God and the Last Day and does what is right - shall have nothing to fear or regret.

And mankind is naught but a single nation.

Fear God and he will give you knowledge.

God is with those who persevere.

He said: The prayer of you both has indeed been accepted, therefore continue in the right way and do not follow the path of those who do not know. (Jonah 10.89).

O you who believe! seek assistance through patience and prayer; surely Allah is with the patient. (The Cow 2.153 ).

Say: Surely my prayer and my sacrifice and my life and my death are (all) for Allah, the Lord of the worlds. (The Cattle 6.162).