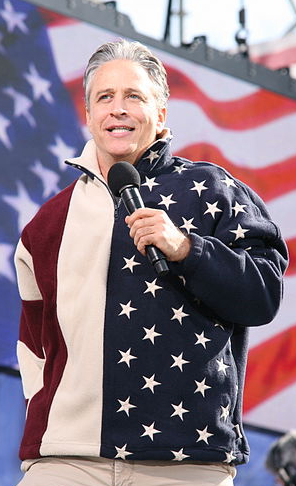 "Outstanding Writing for a Variety, Music or Comedy Program"

If you enjoy these quotes, be sure to check out other famous entertainers! More Jon Stewart on Wikipedia.

I feel your scorn and I accept it.

Does anyone know...does the Christian persecution complex have an expiration date? Because...uh...you've all been in charge pretty much since...uh...what was that guys name...Constantine. He converted in, what was it, 312 A.D. I'm just saying, enjoy your success.

I always knew I shouldn't have said that.

Why can't they have gay people in the army? Personally, I think they are just afraid of a thousand guys with M16s going, "Who'd you call a faggot?"

Alright guys, I want to get out there and vote tomorrow. And not because it's cool, because it's not. You know what is cool? Smoking. Smoke while you vote.

I've been to Canada, and I've always gotten the impression that I could take the country over in about two days.

Ahh, Earth Day, the only day of the year where being able to hacky-sack will get you laid.

There is no such thing as an impartial jury because there are no impartial people. There are people that argue on the web for hours about who their favorite character on "Friends" is.