"John Fitzgerald Kennedy", commonly known as "Jack Kennedy" or by his initials "JFK", was an American politician who served as the List of Presidents of the United States/35th President of the United States from January 1961 until Assassination of John F. Kennedy/his assassination in November 1963. Notable events that occurred during his presidency included the Bay of Pigs Invasion, the Cuban Missile Crisis, the Space Race—by initiating Project Apollo (which later culminated in the Apollo 11/moon landings), the building of the Berlin Wall, the African-American Civil Rights Movement (1955–1968)/African-American Civil Rights Movement, and the increased US involvement in the Vietnam War.

If you enjoy these quotes, be sure to check out other famous presidents! More John F. Kennedy on Wikipedia.

We must never forget that art is not a form of propaganda; it is a form of truth. 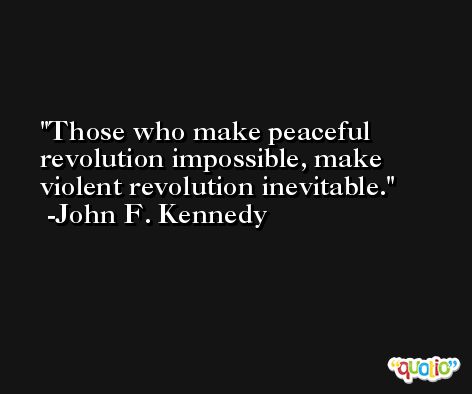 Leadership and learning are indispensable to each other.

Those who have got into the habit of consuming music for free are very hard to shift. And frankly it's an argument for increasing the scale of court cases because at the moment, people still don't think it's going to be them. 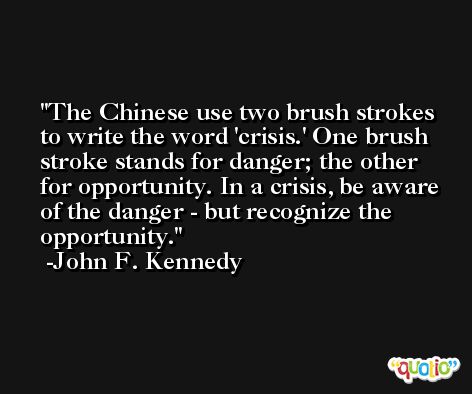 The quality of American life must keep pace with the quantity of American goods. This country cannot afford to be materially rich and spiritually poor.

There will always be dissident voices heard in the land expresing opposition without alternatives, finding fault but never favor, perceiving gloom on every side, and seeking influence without responsibility. When we got into office, the thing that surprised me the most was that things were as bad as we'd been saying they were.

It is our task in our time and in our generation to hand down undiminished to those who come after us, as was handed down to us by those who went before, the natural wealth and beauty which is ours. 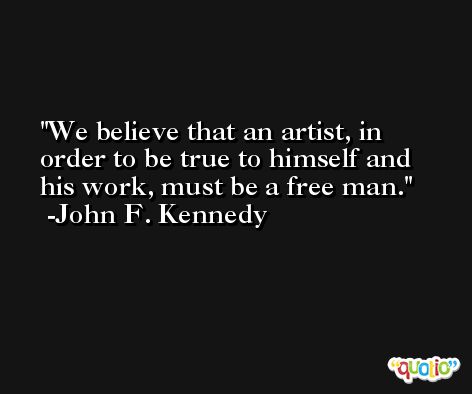 Now I understand why Henry VIII started his own church.

Let every nation know, whether it wishes us well or ill, we shall pay any price, bear any burden, meet any hardship, support any friend, oppose any foe, to assure the survival and success of liberty. 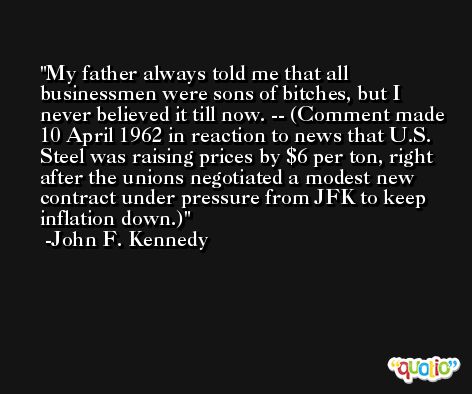 For in the final analysis, our most basic common link, is that we all inhabit this small planet, we all breathe the same air, we all cherish our children's futures, and we are all mortal.

If art is to nourish the roots of our culture, society must set the artist free to follow his vision wherever it takes him. So, let us not be blind to our differences - but let us also direct attention to our common interests and to the means by which those differences can be resolved.

We set sail on this new sea because there is knowledge to be gained. 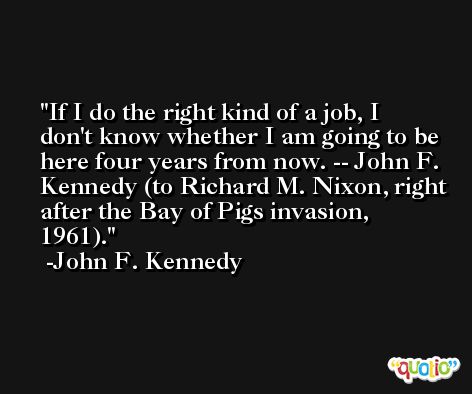 Who can tell who will be the President a year from now? -- John F. Kennedy, speaking to the president of Harvard about why he did not want to delay signing documents relating to a future JFK Presidential Library, 2 October 1963.

I believe this nation should commit itself, to achieving the goal, before this decade is out, of landing a man on the moon and returning him safely to the earth. Change is the law of life; and those who look only to the past or the present are certain to miss the future.

If we cannot end now our differences, at least we can help make the world safe for diversity. 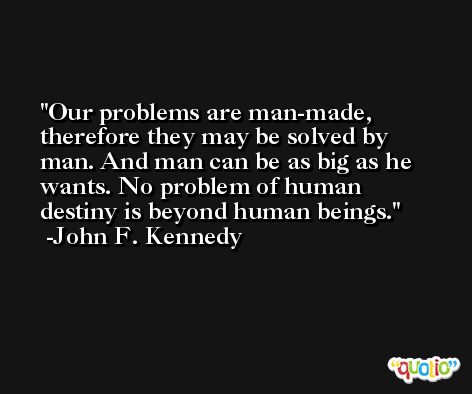 When power narrows the areas of man's concern, poetry reminds him of the richness and diversity of his existence. When power corrupts, poetry cleanses.

I see no magic in tax dollars which are sent to Washington and then returned. The trouble with conservatives today is that most of their thinking is so naive. As for the liberals, their thinking is more sophisticated; but their function ought to be to provide new ideas, and they don't come up with any.

Conformity is the jailer of freedom, and the enemy of growth. I think there is a law of equity in these disputes. When one party is clearly wrong, it will eventually give way... They had no business putting those missiles in and lying to me about it. They were in the wrong and knew it. So, when we stood firm, they had to back down. But this doesn't mean at all that they would back down when they felt they were in the right and had vital interests involved. 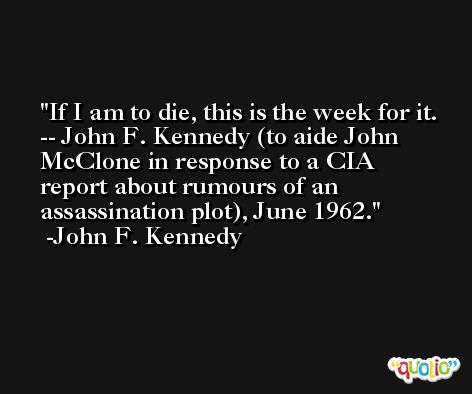 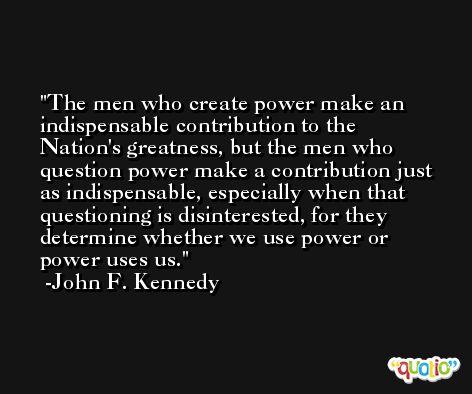 The great enemy of the truth is very often not the lie -- deliberate, contrived and dishonest, but the myth, persistent, persuasive, and unrealistic. Belief in myths allows the comfort of opinion without the discomfort of thought.

But peace does not rest in the charters and covenants alone. It lies in the hearts and minds of all people. So let us not rest all our hopes on parchment and on paper, let us strive to build peace, a desire for peace, a willingness to work for peace in the hearts and minds of all of our people. I believe that we can. I believe the problems of human destiny are not beyond the reach of human beings. The great French Marshall Lyautey once asked his gardener to plant a tree. The gardener objected that the tree was slow growing and would not reach maturity for 100 years. The Marshall replied, 'In that case, there is no time to lose; plant it this afternoon!'

This is the night to go to the theatre, like Abraham Lincoln. We're winning the war but we haven't won the war yet. I think whoever takes over this job in 20 years will still have to fight this fight. All of us have in our veins the exact same percentage of salt in our blood that exists in the ocean, and, therefore, we have salt in our blood, in our sweat, in our tears. We are tied to the ocean. And when we go back to the sea -- whether it is to sail or to watch it -- we are going back from whence we came. Too often we... enjoy the comfort of opinion without the discomfort of thought.

It's easy, they sank my boat. Let us think of education as the means of developing our greatest abilities, because in each of us there is a private hope and dream which, fulfilled, can be translated into benefit for everyone and greater strength for our nation.

We stand for freedom. That is our conviction for ourselves; that is our only commitment to others. If a free society cannot help the many who are poor, it cannot save the few who are rich.

Delta is looking at its airport contracts and leases. The American, by nature, is optimistic. He is experimental, an inventor and a builder who builds best when called upon to build greatly. Our progress as a nation can be no swifter than our progress in education. The human mind is our fundamental resource. We've always been used to the French doing things differently, and in most cases it's charming. But in this case, it's a colossal mistake. It would kill off the French music industry. ...probably the greatest concentration of talent and genius in this house except for perhaps those times when Thomas Jefferson ate alone. Forgive your enemies, but never forget their names.

We need men who can dream of things that never were.