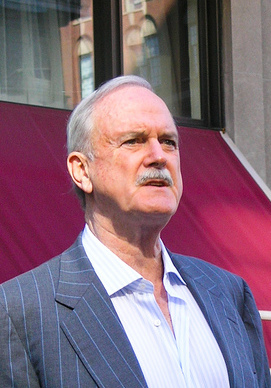 If you enjoy these quotes, be sure to check out other famous actors! More John Cleese on Wikipedia.

You don't have to be the Dalai Lama to tell people that life's about change.

If I can get you to laugh with me, you like me better, which makes you more open to my ideas. And if I can persuade you to laugh at the particular point I make, by laughing at it you acknowledge its truth.

I find it rather easy to portray a businessman. Being bland, rather cruel and incompetent comes naturally to me.

If you want creative workers, give them enough time to play.

He who laughs most, learns best.

The English contribution to world cuisine - the chip.

The one thing I remember about Christmas was that my father used to take me out in a boat about ten miles offshore on Christmas Day, and I used to have to swim back. Extraordinary. It was a ritual. Mind you, that wasn't the hard part. The difficult bit was getting out of the sack.

I used to desire many, many things, but now I have just one desire, and that's to get rid of all my other desires.

If life were fair, Dan Quayle would be making a living asking 'Do you want fries with that?'