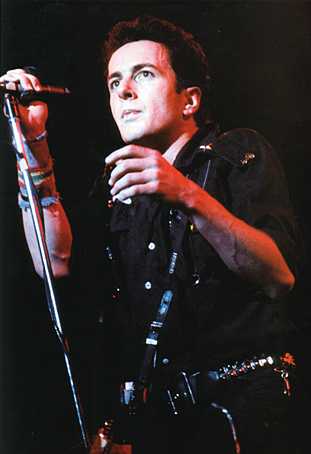 "John Graham Mellor", best remembered by his stage name "Joe Strummer", was a British musician, singer, actor and songwriter who was the co-founder, lyricist, rhythm guitarist and lead vocalist of the punk rock band The Clash, a band that formed in 1976 as part of the original wave of British punk. Along with punk, their music incorporated elements of reggae, ska, Dub music/dub, funk, Hip hop music/rap, and rockabilly. The Clash were one of the most prominent of the emerging bands in the UK punk rock scene, their second album, Give 'Em Enough Rope (1978) reaching number 2 on the UK charts. Soon after, they began achieving success in the US, starting with London Calling (1979), and peaking with 1982's Combat Rock, reaching number 7 on the US charts and being certified 2x platinum there. The Clash's politicised lyrics, musical experimentation, and rebellious attitude had a far-reaching influence on rock, alternative rock in particular.

If you enjoy these quotes, be sure to check out other famous musicians! More Joe Strummer on Wikipedia.

The future is unwritten.

Do not go in there; do not sign with this company, or you'll end up like me - screwed and out on the street. And I am a living legend, you bastards!

Yeah, all those things, responsibility, pressure. It's a bit stressful. I try and come to terms with it by not thinking about it.

I think we're going to have to forget about the radio and just go back to word of mouth.

What I like about playing America is you can be pretty sure you're not going to get hit with a full can of beer when you're singing and I really enjoy that!

Anyway, it's good to be sent back to the underground. There's always a good side to bad things and the good side to this is that at least everyone has to go back down.