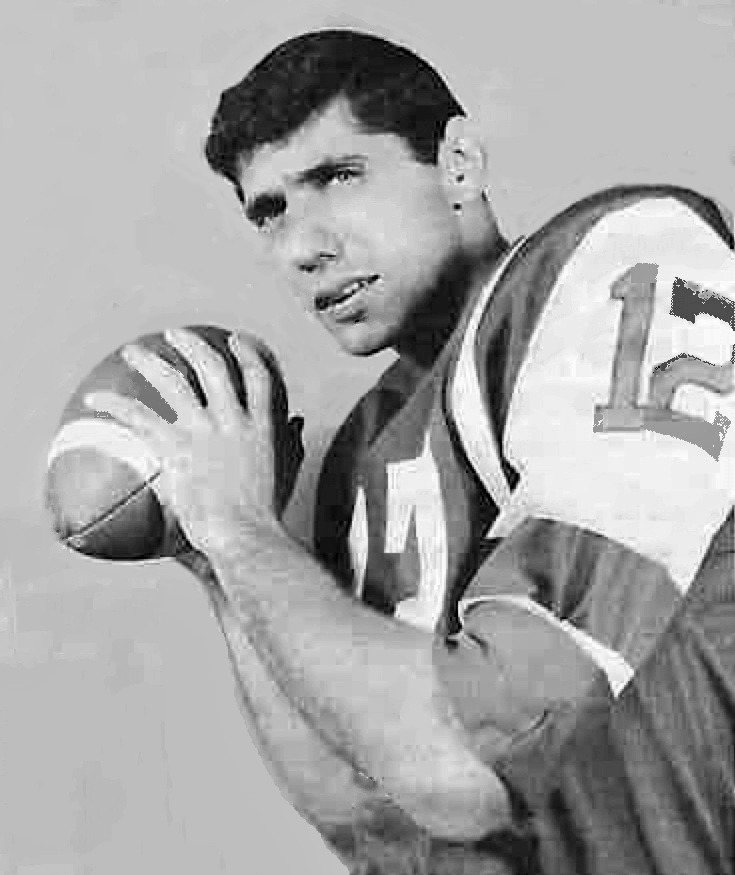 is a former American football quarterback and actor. He played college football for the Alabama Crimson Tide football/University of Alabama under coach Bear Bryant/Paul "Bear" Bryant from 1962 to 1964, and professional football in the American Football League (AFL) and National Football League (NFL) during the 1960s and 1970s. Namath was an American Football League icon and played for that league's New York Jets for most of his professional football career, and finished his career with the NFL's 1977 Los Angeles Rams season/Los Angeles Rams. He was elected to the Pro Football Hall of Fame/Hall of Fame in 1985.

Namath retired after playing in 143 career games (including playoff games) with 68 wins, 71 losses and 4 ties, in his 132 career starts he was 64–64–4, and he was 4–7 coming off the bench in relief. In his career he threw 173 touchdowns, 220 interceptions, and completed 1,886 passes for 27,663 yards. During his thirteen years in the AFL and NFL he played for three division champions (the 1968 and 1969 AFL East Champion Jets and the 1977 NFC West Champion Rams), earned one league championship (American Football League playoffs#1968 Championship/1968 AFL Championship), and one Super Bowl victory (Super Bowl III).

If you enjoy these quotes, be sure to check out other famous athletes! More Joe Namath on Wikipedia.

When you win, nothing hurts.

You learn you can do your best even when it's hard, even when you're tired and maybe hurting a little bit. It feels good to show some courage.

Football Is an honest game. It's true to life . It's a game about sharing. Football is a team game. So is life.

I think that at some point in your life you realize you don't have to worry if you do everything you're supposed to do right. Or if not right, if you do it the best you can... what can worry do for you? You are already doing the best you can.

What I do is prepare myself until I know I can do what I have to do.

If you aren't going all the way, why go at all?

When we won the league championship, all the married guys on the club had to thank their wives for putting up with all the stress and strain all season. I had to thank all the single broads in New York.

First, I prepare. Then I have faith.

I don't know whether I prefer Astroturf to grass. I never smoked Astroturf.