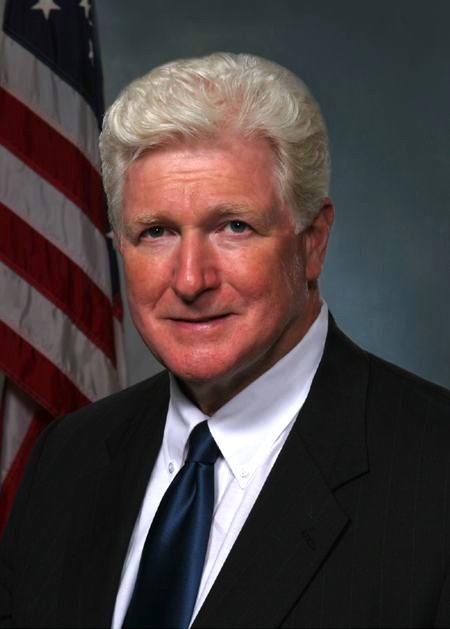 "James Patrick "Jim" Moran, Jr." is a former United States House of Representatives/U.S. Representative for in Northern Virginia, including the cities of Falls Church, Virginia/Falls Church and Alexandria, Virginia/Alexandria, all of Arlington, Virginia/Arlington County, and a portion of Fairfax County. Congressman Moran served from 1991 to 2015, and is a member of the Democratic Party (United States)/Democratic Party.

Moran was the mayor of Alexandria, Virginia from 1985 to 1990, when he resigned to run for Congress. He defeated United States Republican Party/Republican incumbent Stanford Parris in the United States House of Representatives elections, 1990/general election on November 6, 1990, and was sworn in the following January. He is of Irish American/Irish descent, and is the son of professional football player James Patrick Moran, Sr. and the brother of former Democratic Party of Virginia Chairman Brian Moran.

Moran announced on January 15, 2014, that he would retire from Congress at the end of his then-current term.

Because the National Rifle Association is opposed to it.

It is premature, we don't have enough information and . . . it may turn out to be unnecessary.

To close Reagan down to general aviation sends the wrong signal.

We hope that this donation eases at least some of the deep suffering of all those affected by Hurricane Katrina, ... There are so many people who are hurting and in need. It's important that all of us do whatever we can to help.

If you are legally able to obtain a specific piece of information now, you will continue to be able obtain that information after the Act's passage.

Why do they want to protect people who would be shooting other people?

Would probably have helped us apprehend him by now.

No words can describe the tremendous pain and anguish that tens of thousands of people are experiencing, ... Those of us who have been so fortunate to have been out of harm's way need to come forward and do all we can. We hope other companies will help alleviate the overwhelming amount of damage and suffering this devastating storm has created.