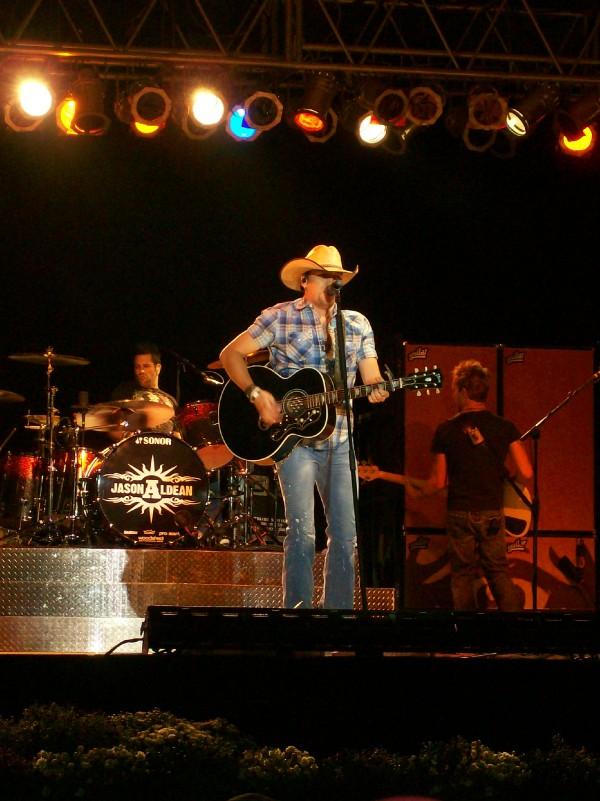 Of his singles, twelve have reached number one on the Hot Country Songs or Country Airplay charts: "Why (Jason Aldean song)/Why", "She's Country", "Big Green Tractor", "The Truth (Trent Willmon song)/The Truth", "Don't You Wanna Stay" (a duet with Kelly Clarkson), "Dirt Road Anthem", "Fly Over States", "Take a Little Ride", "The Only Way I Know" (a collaboration with Luke Bryan and Eric Church), "Night Train (Jason Aldean song)/Night Train", "When She Says Baby" and "Burnin' It Down". Eight more of those singles have reached the Top 10 on the same charts.

I think he's just a great songwriter, and obviously, artist-wise, that speaks for itself.

I can definitely relate to a few things in the song. Going mudding on a dirt road, going to football games, I did a few of those things.

I can picture guys sitting out in their yard, working in their yard, bending over to plant some trees or something, and half their crack shows, ... I mean, that's kind of one of the things that drew me into the song. The song talks about things that I grew up experiencing.

I went and took it to the label, and they loved it, so we put it on the record.

Why are you always on the verge of goodbye, before I'll show you how I really feel inside.

I do believe that if it's meant to be, it will be. Luckily for me, things worked out.

There's many an artist that comes to Nashville in hopes of doing the same thing I'm doing right now.

I think anytime we can do anything for anyone it's good. We just happened to be in a position where we could help out. … Anything that has to do with family and kids, it doesn't take much convincing for me.