"Henry Ford" was an American Business magnate/industrialist, the founder of the Ford Motor Company, and sponsor of the development of the assembly line technique of mass production.

Although Ford did not invent the automobile or the assembly line, he developed and manufactured the first automobile that many middle class Americans could afford. In doing so, Ford converted the automobile from an expensive curiosity into a practical conveyance that would profoundly impact the landscape of the twentieth century. His introduction of the Ford Model T/Model T History of the automobile/automobile revolutionized transportation and American industry. As owner of the Ford Motor Company, he became one of the richest and best-known people in the world. He is credited with "Fordism": mass production of inexpensive goods coupled with high wages for workers. Ford had a global vision, with consumerism as the key to peace. His intense commitment to systematically lowering costs resulted in many technical and business innovations, including a Franchising/franchise system that put dealerships throughout most of North America and in major cities on six continents. Ford left most of his vast wealth to the Ford Foundation and arranged for his family to control the company permanently.

If you enjoy these quotes, be sure to check out other famous businessmen! More Henry Ford on Wikipedia.

Quality means doing it right when no one is looking.

If money is your hope for independence you will never have it. The only real security that a man will have in this world is a reserve of knowledge, experience, and ability. 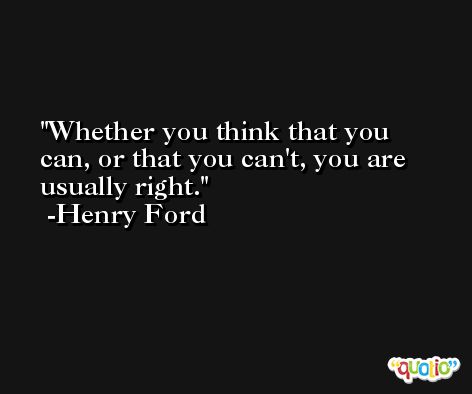 Life is a series of experiences, each one of which makes us bigger, even though sometimes it is hard to realize this.

When I can't handle events, I let them handle themselves. 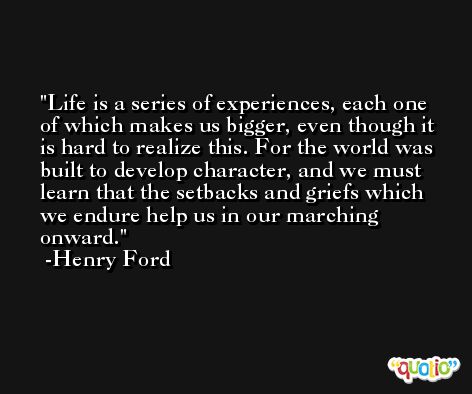 Reading musses up my mind.

Exercise is bunk. If you are healthy, you don't need it; if you are sick, you shouldn't take it. 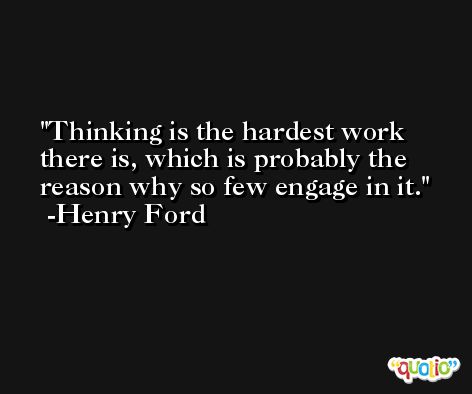 When everything seems to be going against you, remember that the airplane takes off against the wind, not with it.

It is well enough that the people of this nation do not understand our banking and monetary system, for if they did, I believe there would be a revolution before tomorrow morning. 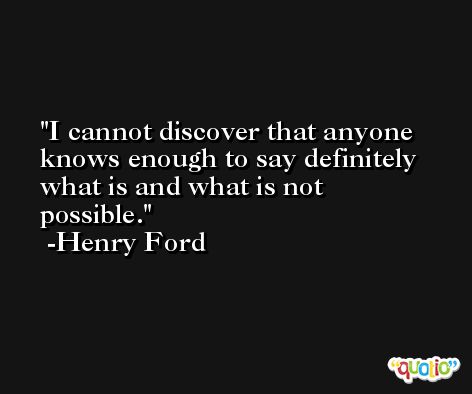 The highest use of capital is not to make more money, but to make money do more for the betterment of life.

History is more or less bunk. It's tradition. We don't want tradition. We want to live in the present and the only history that is worth a tinker's dam is the history we made today. 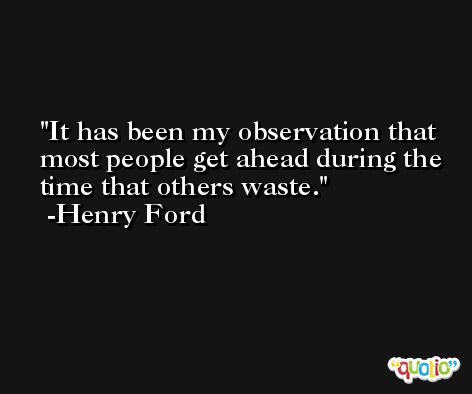 I am looking for a lot of men who have an infinite capacity to not know what can't be done. 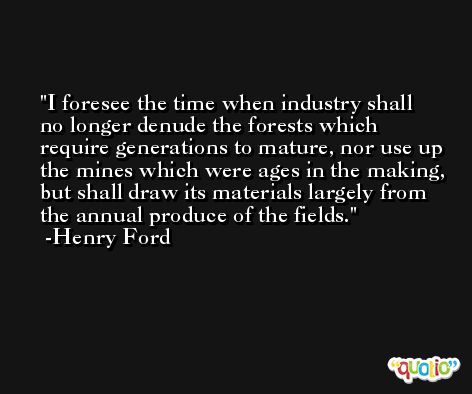 Obstacles are those frightful things you see when you take your eyes off your goal. 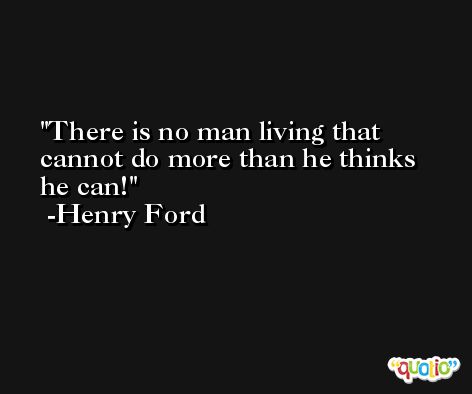 I believe God is managing affairs and that He doesn't need any advice from me. With God in charge, I believe everything will work out for the best in the end. So what is there to worry about.

One of the greatest discoveries a man makes, one of his great surprises, is to find he can do what he was afraid he couldn't do. 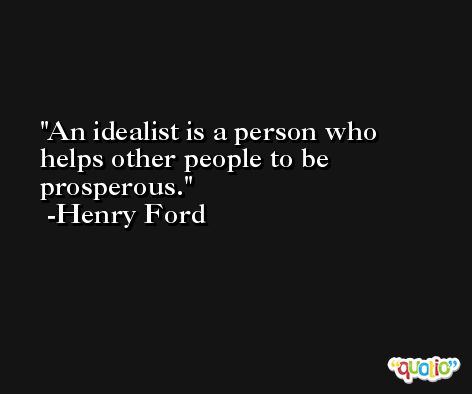 There is one rule for the industrialist and that is: Make the best quality of goods possible at the lowest cost possible, paying the highest wages possible.

If you take all the experience and judgment of men over fifty out of the world, there wouldn't be enough left to run it. 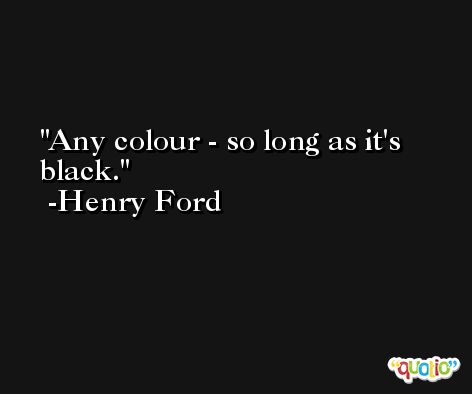 My best friend is the one who brings out the best in me. 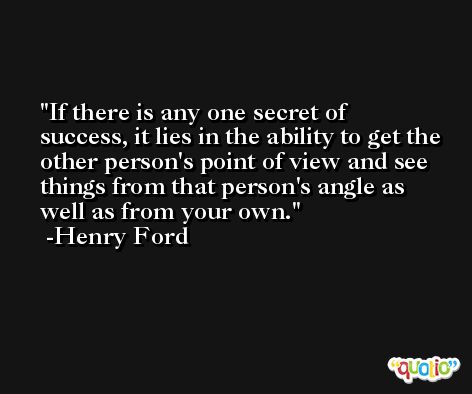 Whether you believe you can do a thing or not, you are right.

Failure is the opportunity to begin again more intelligently. 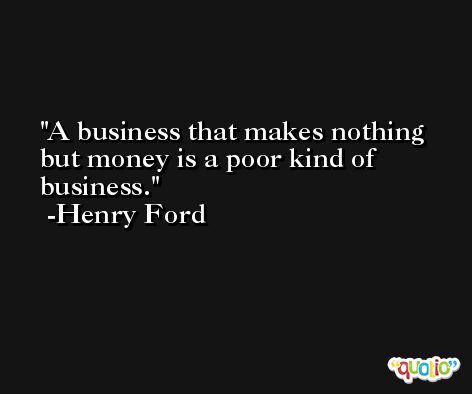 History is more or less bunk. 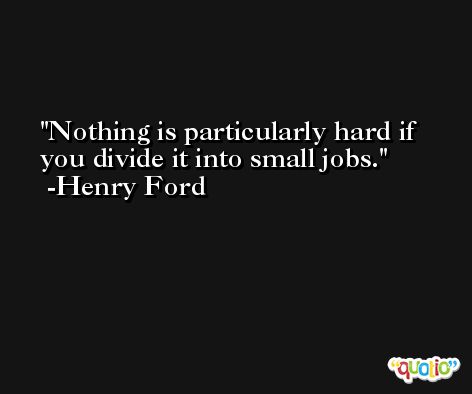 You can't build a reputation on what you are going to do. 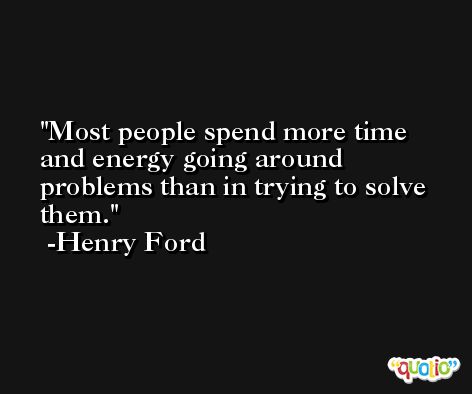