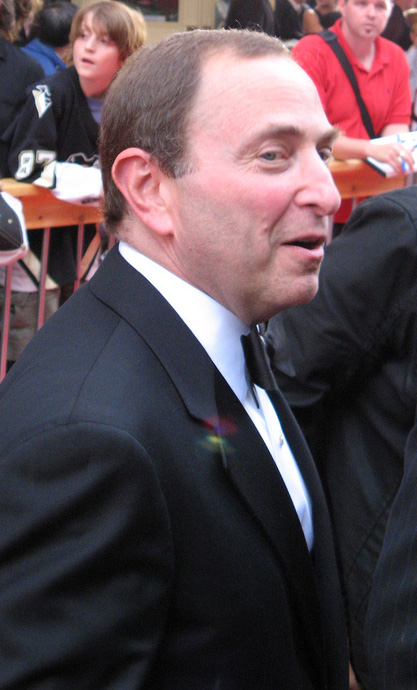 "Gary Bruce Bettman" is the NHL Commissioner/commissioner of the National Hockey League (NHL), a post he has held since February 1, 1993. Previously, Bettman was a senior vice-president and general counsel to the National Basketball Association (NBA). Bettman is a graduate of Cornell University and New York University School of Law.

Under Bettman, the NHL has seen rapid growth of league revenues, from $400 million when he was hired to over $3.0 billion in 2010–11 NHL season/2010–11. He also oversaw the expansion of the NHL's footprint across the United States, with six new teams added during his tenure, bringing the NHL to 30.

However, Bettman's tenure in the NHL has been controversial. He has often been criticized for attempting to "Americanize" the game, and expanding the league into non-traditional ice hockey/hockey markets such as the Southern United States/American South at the expense of the more traditional markets in Canada and the Northern United States. Bettman has also been a central figure of three labor stoppages, including the 2004–05 NHL lockout that saw the entire season canceled. These controversies have made him unpopular with many fans around the league.

If you enjoy these quotes, be sure to check out other famous businessmen! More Gary Bettman on Wikipedia.

The National Hockey League will miss Brett's skill, his scoring touch, and his fun-loving attitude. He was a splendid athlete, a passionate player, and someone who never hesitated to speak his mind. His achievements further cement the Hull family legacy of hockey greatness.

He was a splendid athlete, a passionate player and someone who never hesitated to speak his mind.

We had a candid dialogue, ... If Congress, because of what's going on in some other sports, thinks we need to do more, then we'll work with Congress.

We don't think performance-enhancing drugs is much of an issue ... If you look at the history of hockey players throughout the world being tested . . . you rarely ever get a positive test.

OLN is anticipating, as are we, subscriber growth.

Clearly the cap is going up and that's good for everybody.

I respect our players. They're prepared to forgo $1 billion in salaries this year alone and maybe hundreds of millions -- if not a billion -- next year. You've got to respect that. I don't always understand it, but I respect it.

We always had confidence in the game and our fans.

I thought that in light of the new era that we were ushering in, there would be no better indication of the fact that the players and the league are working together to move things forward that the best indication of that would be to have Ted here. And perhaps even more important, I thought it was important for the governors to hear what's on the players' mind.