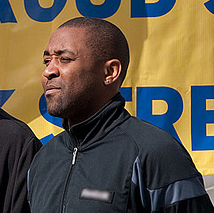 "Darren Andrew Campbell" Order of the British Empire/MBE is a former England/English Sprint (race)/sprint Athletics (sport)/athlete. He is currently the sprint coach at Cardiff City F.C. He competed in the 100 metres and 200 metres, as well as the 4 × 100 metres relay. Campbell is the European records in athletics/European record holder in the relay event with 37.73 seconds.

It would be easy for us to walk away but maybe it's time, like Michael says, to step up. Maybe it's time some of the experienced athletes came down and helped some of the youngsters ... this championship has shown there are some flaws.

I'm alive and getting stronger every day.

It's time for us all to step up. We've been extremely successful, but to be honest it's a reality check for everybody.

Well, to begin with, he is compassionate. He is not a bully. He doesn't throw cups of tea. People who say he is arrogant don't know him. What it is about him is confidence, belief. I know it's a fine line, but I have known him since I was a 14-year-old and he has always had a soft side. One of his greatest assets is that mentally he is one of the strongest people I have ever met.

We hear people saying, all over the place, we don't want to become another Vail.