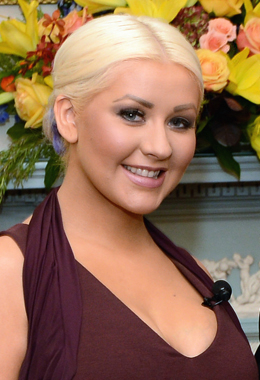 "Christina María Aguilera" is an American singer, songwriter, and actress. Born in Staten Island, New York and raised in Rochester, Pennsylvania/Rochester and Wexford, Pennsylvania, she appeared on the television series Star Search and The Mickey Mouse Club in her early years. In 1999, Aguilera rose to prominence with her Christina Aguilera (album)/self-titled debut album, which debuted at number one on the U.S. Billboard 200/Billboard 200 and spawned the U.S. Billboard Hot 100/Billboard Hot 100 number-one singles "Genie in a Bottle", "What a Girl Wants (Christina Aguilera song)/What a Girl Wants", and "Come On Over Baby (All I Want Is You)". A year later, she released her first Spanish-language album Mi Reflejo, which sold over three million copies worldwide and the holiday album My Kind of Christmas. Displeased with her lack of input in her image and music, Aguilera assumed creative control for her fourth studio album, Stripped (Christina Aguilera album)/Stripped (2002), which draws influences from a variety of music genre/genres including soul music/soul, hip hop music/hip hop, Latin music (genre)/Latin, and rock music/rock. The album spawned the top-ten singles "Dirrty" and "Beautiful (Christina Aguilera song)/Beautiful", and earned a Grammy Award for Best Female Pop Vocal Performance for "Beautiful".

If you enjoy these quotes, be sure to check out other famous musicians! More Christina Aguilera on Wikipedia.

Pop is actually my least favorite kind of music, because it lacks real depth.

I'm an ocean, because I'm really deep. If you search deep enough you can find rare exotic treasures.

Whatever I do, it's my business. It's not my job to parent America.

I want a bad boy in public, and a pussy cat at home!

Britney and I show a little tummy and it's like, 'Oh My God.' But N'Sync or Backstreet Boys will do repeated pelvic thrusts to an audience of pre-pubescent girls and nobody says anything!

I'm always nervous before I go on stage, but once I'm out there everything is great and it's my favorite place to be.

So, where's the Cannes Film Festival being held this year?

Now what to do. My heart has been bruised. So sad but it's true. Each beat reminds me of you.

I'm not really religious but very spiritual. I give money to this company that manufactures hearing aids on a regular basis. More people should really hear me sing. I have a gift from God.