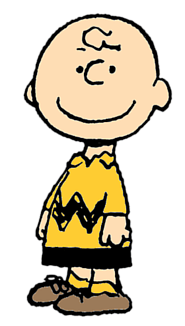 "Charlie Brown" is the central protagonist of the long-running comic strip Peanuts, syndicated in daily newspaper/daily and Sunday newspapers in numerous countries all over the world. One of the great American archetypes, he is a very round, multidimensional, well-received, and well-known cartoon character.

Charlie Brown is characterized as a person who frequently suffers, and as a result, is usually nervous and lacks self-confidence. He shows both pessimistic and optimistic attitudes: on some days, he is reluctant to go out because his day might just be spoiled, but on others, he hopes for the best and tries as much as he can to accomplish things.

The character's creator, Charles M. Schulz, has said of the character that "[He] must be the one who suffers, because he is a caricature of the average person. Most of us are much more acquainted with losing than winning." Despite this, Charlie Brown does not always suffer, as he has experienced some happy moments and victories through the years, and he has often shown self-assertiveness despite his also-often nervousness.

Schulz has also said: "I like to have Charlie Brown to be the focal point of almost every story."

The character, as Schulz frequently said and addressed, is inspired by some of his painful experiences in life.

There must be millions of people all over the world who never get any love letters . . . I could be their leader.

It always looks darkest just before it gets totally black.

This is my depressed stance. When you're depressed, it makes a lot of difference how you stand. The worst thing you can do is straighten up and hold your head high because then you'll start to feel better. If you're going to get any joy out of being depressed, you've got to stand like this.

There are three things in life that people like to stare at: a flowing stream, a crackling fire and a Zamboni clearing the ice.

Hapiness is anyone and anything that's loved by you.

If I stand here, I can see the Little Red Haired girl when she comes out of her house... Of course, if she sees me peeking around this tree, she'll think I'm the dumbest person in the world... But if I don't peek around the tree, I'll never see her... Which means I probably AM the dumbest person in the world... which explains why I'm standing in a batch of poison oak.