"Yoweri Kaguta Museveni" is a Ugandan politician who has been President of Uganda since 29 January 1986.

Museveni was involved in rebellions that toppled Ugandan leaders Idi Amin (1971–79) and Milton Obote (1980–85). With the notable exception of the north, President Museveni has brought relative stability and economic growth to a country that has endured decades of rebel activity and civil war. His tenure has also witnessed one of the most effective national responses to HIV/AIDS in Africa.

In the mid to late 1990s, Museveni was fêted by Western world/the West as part of a new generation of African leaders. His presidency has been marred, however, by involvement in Second Congo War/civil war in the Democratic Republic of Congo and other Great Lakes (Africa)/Great Lakes region conflicts. Rebellion in the north by the Lord's Resistance Army continues to perpetuate one of the world's worst humanitarian emergencies. Restrictions on political pluralism and a 2005 referendum and constitution change scrapping limits on presidential terms, enabling extension of his rule, have attracted recent concern from domestic commentators and the international community.

If we don't catch them, we shall kill them, ... These bandits are not able to permanently engage us because they will be wiped out. Now that they have invited us, I think they are going to find out that it was not a wise decision.

Some people say accident. It may be an accident, it may be something else, ... very well equipped . . . the one I am flying all the time. I am not ruling anything out. Either the pilot panicked, or there was some side wind, or the instruments failed, or there was an external factor. 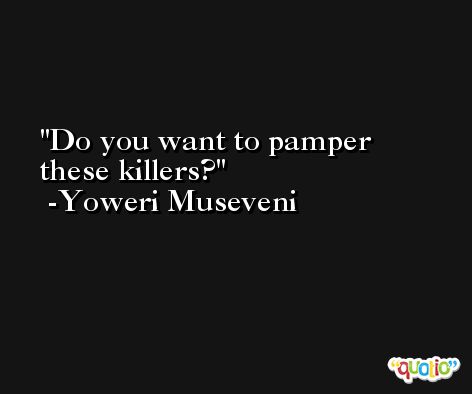 One based on speculation, smuggling.  [There was] a black market on foreign currency and revenues were not being collected.  So we cured all that.

If Gen. Omar el Bashir's government gives me permission to pursue Kony beyond the red line, it will only take me 30 minutes to finish him and his fighters. 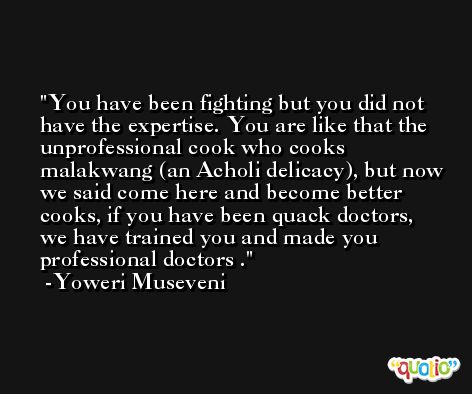 We used to fight the LRA with only one dimensional force that only walks on foot, but now, we have got multiple forces to fight the rebels.

I've never heard an agency say, 'Unless you industrialize I will not support you.' 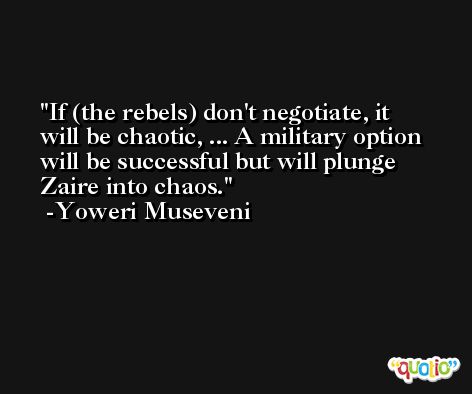