"Will Thomas", born 1958 in Bucks County, Pennsylvania, is a novelist who writes a Victorian mystery series featuring Cyrus Barker, a Scottish detective or "private enquiry agent," and his Welsh people/Welsh assistant, Thomas Llewelyn. The Barker/Llewelyn novels are set in the 1880s and often feature historical events, people, and movements. Martial combat is a recurring theme throughout this hardboiled series. In interviews, Thomas has said that Barker is based on men such as Richard Francis Burton and Edward William Barton-Wright, founder of Bartitsu.

Prior to writing novels, Will Thomas wrote essays for Sherlock Holmes society publications and lectured on crime fiction of the Victorian era.

Will Thomas is a great fan of Rex Stout, author of the Nero Wolfe mysteries. Thomas studies Victorian martial arts such as Bartitsu and Hung Gar, which he uses in his novels.

If you enjoy these quotes, be sure to check out other famous novelists! More Will Thomas on Wikipedia.

We proved to everybody we belonged. No one can take that from us. The doubters, they can keep on doubting. We'll try to come back next year and prove it again.

This says we belong, we belong in this tournament. There are no doubts that we can play with anyone in the country. 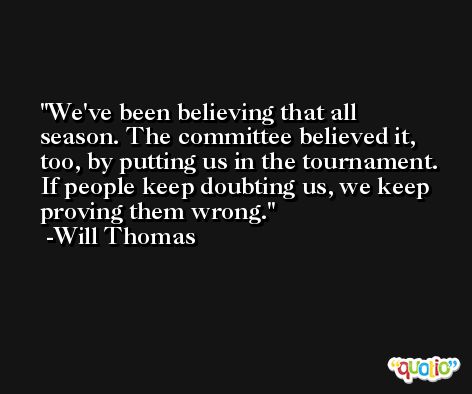 Coming into the game, we knew Paul Davis fouled a lot. Coach just told me to take it to him. If we can make shots in the beginning of the game, it builds our confidence up. We just carried that confidence into the second half. We just shot well.

I hear him screaming all the time, from almost anything. I'm not wild about it. 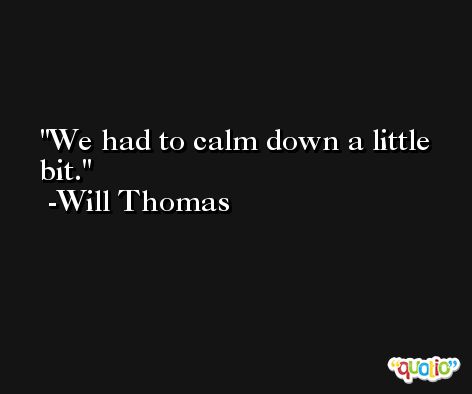 They're a great team. They were picked to win the tournament. But we didn't fear them. They've got size over us, but we've got big hearts.

I'm more serious about the job. I think Jack needs to mature a little more, honestly.