"Tyler Mitchell" is an acclaimed jazz bassist and has recorded and toured with some of Jazz's most respected artists including: Art Taylor, Jon Hendricks, Shirley Horn, George Coleman and The Sun Ra Akestra. He is unique in that he is active in both the traditional and avant-garde jazz idioms and is currently in demand as both a leader and a sideman in New York City. He studied the bass with Donald Raphael Garrett (John Coltrane, Archie Shepp, Roland Kirk) and Malachi Favors (Art Ensemble of Chicago). He has recorded on Grammy nominated recordings and has recorded at The Village Vanguard.

In 1985, after moving to New York, Tyler joined The Sun Ra Akestra and toured extensively through Europe & Japan and recorded two albums with them.

In 1988, he joined Art Taylor in his 'Taylor's Wailer's' recording 2 CDs, including one live CD at The Village Vanguard.

He joined Jon Hendricks' European Tour in 1990 and recorded Freddie Freeloader (album) on the DENON Jazz label with Stanley Turrentine, Wynton Marsalis, among others. The album was nominated for a Grammy Award that year.

I think I missed that breaking news story.

The best advice I can give is to keep working hard. Everyone starts out just 'ok,' but if you stick with it and never give up, the rewards are great. 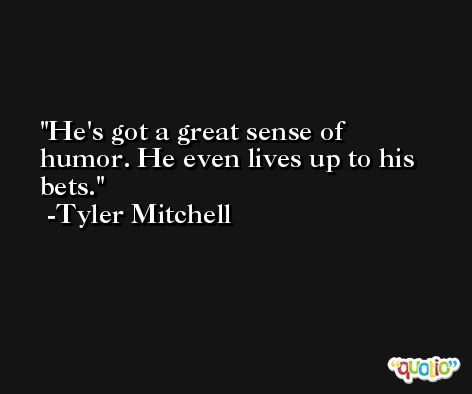 We wanted to inject some of that into the script.

It was great, we all took turns. He looks like a totally different person.