"Janet Miriam Holland Taylor Caldwell" was an Anglo-American novelist and prolific author of popular fiction, also known by the pen names Marcus Holland and Max Reiner, and by her married name of J. Miriam Reback.

In her fiction, she often used real historical events or persons. Taylor Caldwell's best-known works include Dynasty of Death, Dear and Glorious Physician (about Luke the Evangelist/Saint Luke), and Captains and the Kings/The Captains and the Kings. Her last major novel, Answer as a Man, appeared in 1980.

If you enjoy these quotes, be sure to check out other famous writers! More Taylor Caldwell on Wikipedia.

There will be no peace in the tormented world, only a programmed and systematic series of wars and calamities-until the plotters have gained their objective: an exhausted world willing to submit to a PLANNED Marxist economy and total and meek ENSLAVEMENT-in the name of PEACE.

Contrary to general opinion, women are not so sentimental as men, but are much more hardheaded. 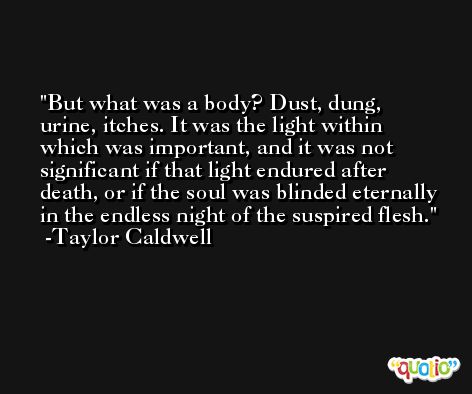 Learning should be a joy and full of excitement. It is life's greatest adventure; it is an illustrated excursion into the minds of the noble and the learned.