"Stan Barnes" was an American football player, judge and assistant attorney general of the United States.

Born in Wisconsin, Barnes played high school football at San Diego High for Nibs Price/Clarence "Nibs" Price, who encouraged his brightest players, starting with Barnes, to follow his path to Berkeley to play for the California Golden Bears football/California Golden Bears under coach Andy Smith (American football)/Andy Smith. Barnes was a center/tackle on California's "Wonder Teams" of 1920 and 1921. In his junior and senior seasons he played with the Bears in two consecutive Rose Bowls.

The 1920 California squad won the national championship going 9-0 outscoring its opponents 510 to 14. In one of the biggest routs in college football history, the Bears defeated St. Mary's 127-0. In the Rose Bowl, Cal defeated the Ohio State Buckeyes 28-0.

During his four years at Berkeley, Barnes played on teams that won 31 lost four and tied two.

When voters see this bill on her desk, they will expect a signature. The average Arizonan will not want to hear about legal wriggling about a separation-of-powers issue.

Everything she does is based on the cold reality that it will draw a lot of attention and will anger someone, some large bloc of voters. 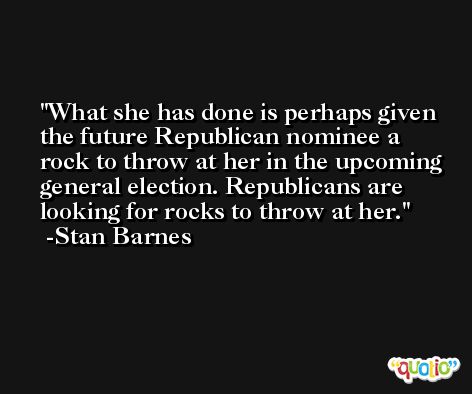