"Sam Keen" is a noted United States/American author, professor, and philosopher who is best known for his exploration of questions regarding love, life, religion, and being a man in contemporary society. He also co-produced Faces of the Enemy, an award-winning PBS documentary film/documentary; was the subject of a Bill Moyers television special in the early 1990s; and for 20 years served as a contributing editing/editor at Psychology Today magazine. He is also featured in the 2003 documentary Flight from Death.

Keen is married to the Rev. Patricia de Jong, who is senior minister at First Congregational Church of Berkeley, United Church of Christ, in Berkeley, California.

If you enjoy these quotes, be sure to check out other famous writers! More Sam Keen on Wikipedia.

A society in which vocation and job are separated for most people gradually creates an economy that is often devoid of spirit, one that frequently fills our pocketbooks at the cost of emptying our souls. 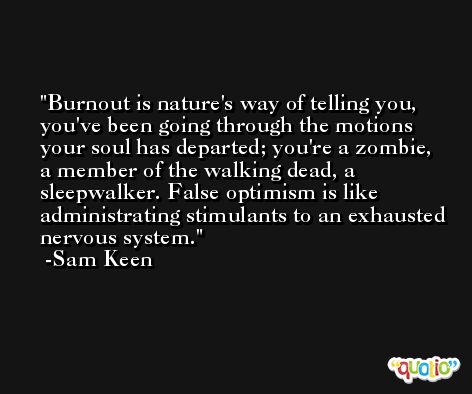