"Roger Angell" is an American essayist known for his writing on Sports journalism/sports, especially baseball. He has been a regular contributor to The New Yorker and was its chief fiction editor for many years. He has written numerous works of fiction, non-fiction, and criticism, and for many years wrote an annual Christmas poem for The New Yorker.

He was elected a Fellow of the American Academy of Arts and Sciences in 2007 and is a long-time ex-officio member of the council of the Authors Guild.

He was named the 2014 recipient of the J. G. Taylor Spink Award by the Baseball Writers' Association of America on December 10, 2013.

If you enjoy these quotes, be sure to check out other famous writers! More Roger Angell on Wikipedia.

Tim is unusual because he is such an enthusiast for the game. A lot of people I know can't stand him. "I just can't stand him," they'll say. "He's always blathering on about baseball."

Once I could persuade these guys that all I wanted to hear from them was what they did - Tell me what you do - once you can persuade someone that this is all you're after, you can't shut them up because we're all fascinated by what we do. 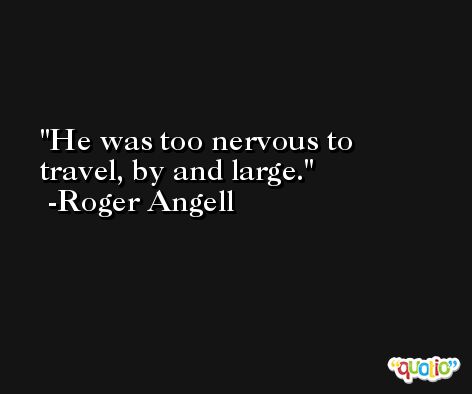 I knew I wasn't a baseball writer. I was scared to death. I really was afraid to talk to players, and I didn't want to go into the press box because I thought I was faking it.

The rest were just pieces I liked, pieces that seemed fresh to me when I went back to them, sometimes for the first time in a long time. 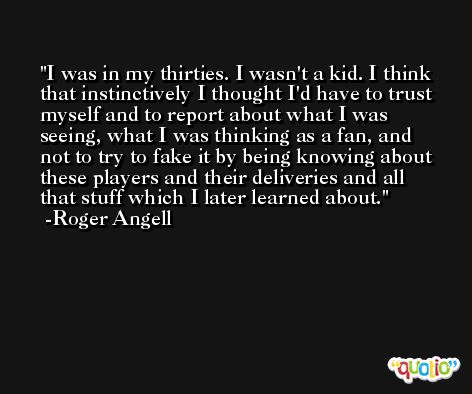