"Robert Arthur Morton Stern", usually credited as "Robert A. M. Stern", is a New York City and New Haven based American architect, professor, and academic writer. He is currently the Dean of the Yale School of Architecture. He also heads his own architecture firm, Robert A. M. Stern Architects, often referred to as RAMSA.

Stern is a representative of New Urbanism and New Classical Architecture, with a particular emphasis on urban context and the continuity of traditions. He may have been the first architect to use the term "postmodernism," but more recently he has used the phrase "Modern traditionalist" to describe his work. In 2011, Stern was honored with the renowned Driehaus Architecture Prize for his achievements in contemporary classical architecture. Some of his firm's major works include New York City's new classical 15 Central Park West, and the late modern Comcast Center (Philadelphia)/Comcast Center skyscraper in Philadelphia.

If you enjoy these quotes, be sure to check out other famous architects! More Robert A. M. Stern on Wikipedia.

The American dream has always depended on the dialogue between the present and the past. In our architecture, as in all our other arts-indeed, as in our political and social culture as a whole-ours has been a struggle to formulate and sustain a usable past. 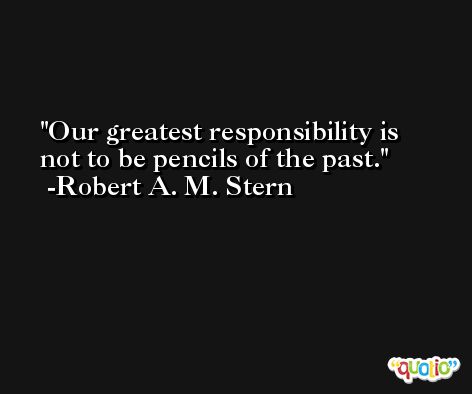