"Polybius" was a Greek historian of the Hellenistic Period noted for his work, which covered the period of 264–146 BC in detail. The work describes the rise of the Roman Republic to 'world power' (i.e. domination over the Mediterranean world). Polybius is also renowned for his ideas concerning the separation of powers in government, later used in Montesquieu's The Spirit of the Laws and in the drafting of the United States Constitution.

Polybius was born in Arcadia around 200 BC. He was the son of Lycortas, a Greeks/Greek politician who became Cavalry Commander of the Achaean League. His father's opposition to Roman control of Macedonia (Roman province)/Macedonia resulted in his imprisonment. Polybius was then deported to Rome, where Lucius Aemilius Paullus Macedonicus/Lucius Aemilius Paulus employed him to tutor his two sons.

If you enjoy these quotes, be sure to check out other famous historians! More Polybius on Wikipedia.

On any occasion when one can discover the cause of events, one should not resort to the gods.

There is no witness so dreadful, no accuser so terrible as the conscience that dwells in the heart of every man. 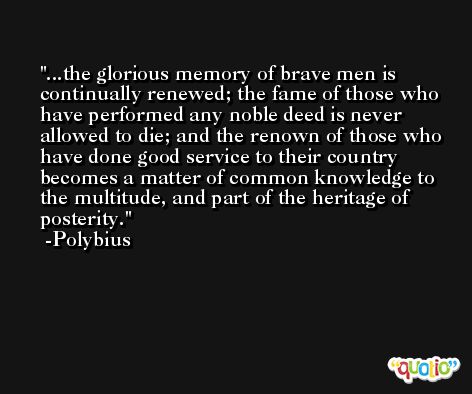