"Paul T. Dee" was General Counsel and Athletic Director (AD) of the University of Miami (UM) in Coral Gables, Florida. He held the position of AD from 1993 until 2008, when he stepped down and Kirby Hocutt was tabbed his replacement.

Dee was the Committee on Infractions chairman for USC's much-publicized case in the summer of 2010 involving former stars Reggie Bush and O.J. Mayo. It was Dee who, in announcing some of the stiffest penalties of the last 20 years (a two-year bowl ban and 30 docked scholarships), closed with the reminder that "high-profile athletes demand high-profile compliance." He was born in Hoboken, New Jersey. Accusations later came out that, under his tenure as athletic director, Miami had also been the center of major improper benefits.

A lot is on the table. We'll make the decision based on the best information we have available.

He's always talking about all the members of the NFL that had played at the U. 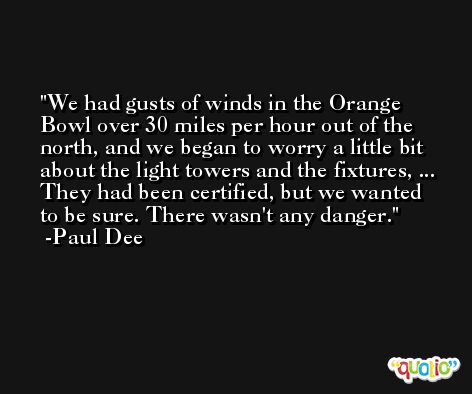 We're going to base it on the best information the National Hurricane Center and others have for us at that time. Our first priority is the safety of the players and of the fans. And we're pretty experienced at this.

We're going to talk about all reasonable possibilities that deal with safety for the players, students and fans. The conference is very concerned about Wilma, and we know we can't sit around here until Friday to make a decision. 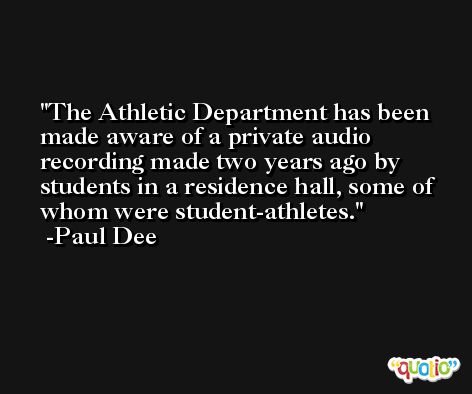 There were a lot of elements involved in the game. The players, the coaches, the fans particularly, allowing them to come to the game without the pressure of a storm coming down on us.

We want to begin getting continuity back in this community. It's important people have some entertainment and get their minds off all this for a few hours if possible. 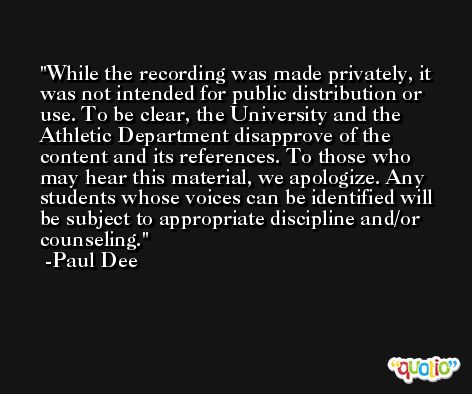