"Patrick Dennis" (May 18, 1921 – November 6, 1976) was an American author. His novel Auntie Mame/ Auntie Mame: An Irreverent Escapade (1955) was one of the bestselling American books of the 20th century. In chronological vignettes, the narrator — also named Patrick — recalls his adventures growing up under the wing of his madcap aunt, Mame Dennis. Dennis wrote a sequel, Around the World with Auntie Mame, in 1958. Dennis based the character of Mame Dennis on his father's sister. He also wrote several novels under the pseudonym Virginia Rowans.

"I write in the first person, but it is all fictional. The public assumes that what seems fictional is fact; so the way for me to be inventive is to seem factual but be fictional." All of Dennis's novels employ to some degree the traditional comic devices of masks, subterfuge and deception.

If you enjoy these quotes, be sure to check out other famous writers! More Patrick Dennis on Wikipedia.

Chinchilla is said to be more chic than mink, though personally it reminds me of unborn burlap. 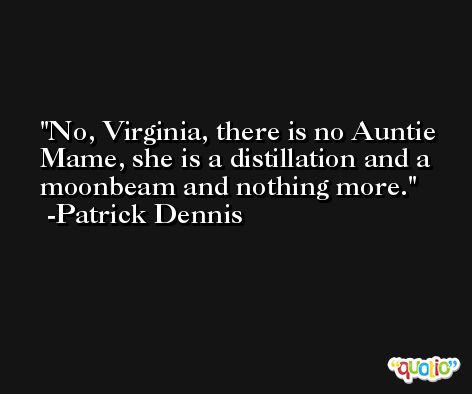 Writing isn't hard. It isn't any harder than ditch-digging.

I always start writing with a clean piece of paper and a dirty mind.