"Monica Baldwin" (1893–1975) was a British writer, a niece of British Prime Minister Stanley Baldwin, who was a canoness regular for 28 years. After leaving her enclosed Order, she wrote of her experiences in a series of books which received a widespread audience at the time, giving the first direct account of life in a Religious Order, from a former member, in that period.

If you enjoy these quotes, be sure to check out other famous writers! More Monica Baldwin on Wikipedia.

The moment when you first wake up in the morning is the most wonderful of the twenty-four hours. No matter how weary or dreary you may feel, you possess the certainty that, during the day that lies before you, absolutely anything may happen. And the fact that it practically always doesn't, matters not a jot. The possibility is always there.

A wisp of gossamer, about the size and substance of a spider's web. 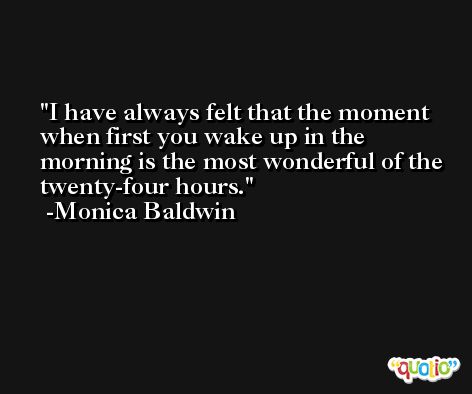 The refectory is a cenacle in which the taking of food is transfigured almost into a sacrament.