"Michael Arthur Newdow" is an United States/American attorney and emergency medicine physician. He is best known for his efforts to have recitations of the current version of the Pledge of Allegiance in Public school (government funded)#United States/public schools in the United States declared United States Constitution/unconstitutional because of its inclusion of the phrase "under God". He also filed and lost a lawsuit to stop the invocation prayer at President Bush's second inauguration and in 2009 he filed a lawsuit to prevent references to God and religion from being part of President Obama's inauguration.

Newdow is an atheism/atheist and an ordained minister of the Universal Life Church. In 1997, he started an organization called FACTS (First Atheist Church of True Science), which advocates strong separation of church and state in public institutions. He also serves on the Advisory Board of Secular Coalition for America.

If you enjoy these quotes, be sure to check out other famous lawyers! More Michael Newdow on Wikipedia.

I think that everybody would not be sitting here saying, 'Oh, what harm is that.' They'd be furious. And that's exactly what goes on against atheists. And it shouldn't.

One nation indivisible, with liberty and justice for all. 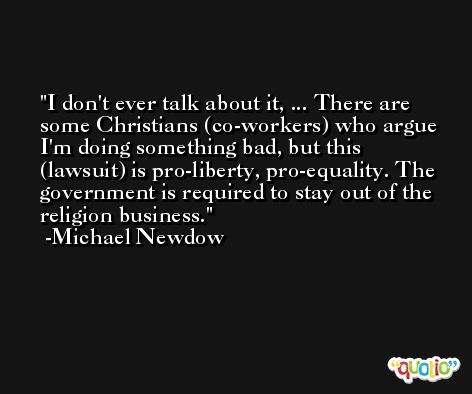 A federal judge did as he was supposed to do and upheld the Constitution. We should be thankful that we have judiciary that will do that.

Imagine every morning if the teachers had the children stand up, place their hands over their hearts, and say, 'We are one nation that denies God exists,'. 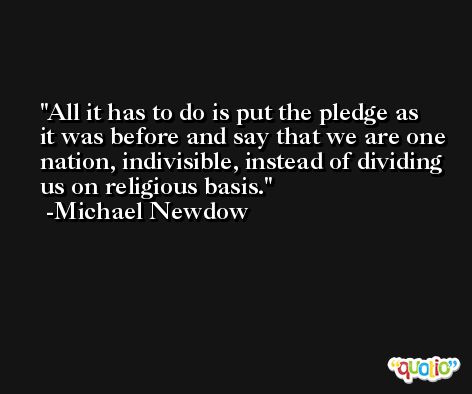