"Melody Beattie" is the author of Codependent No More, published in 1987 by the Hazelden Foundation. The book was successful and influential within the self-help movement, selling over eight million copies and introducing the word codependent to the general public.[http://www.time.com/time/magazine/article/0,9171,971920,00.html Taking Care of Herself - TIME]

Following the success of Codependent No More, Beattie authored over a dozen other books, including Beyond Codependency and The Language of Letting Go. Her most recent book is Make Miracles in Forty Days: Turning What You Have into What You Want, published in 2010. Several of her books have been published in other languages.

Similar to the work of Bill W. and Alcoholics Anonymous five decades earlier, Beattie's early work synthesizes psychoanalytic theory (especially object relations and the work of Heinz Kohut, Wilfrid Bion, and Otto Kernberg) into language people can easily grasp and use. In Codependent No More, Beattie also functioned as a popularizer of science, especially the work of psychiatrist Timmen Cermak, author of Diagnosing and Treating Co-Dependence.

If you enjoy these quotes, be sure to check out other famous writers! More Melody Beattie on Wikipedia.

Gratitude unlocks the fullness of life. It turns what we have into enough, and more. It turns denial into acceptance, chaos to order, confusion to clarity. It can turn a meal into a feast, a house into a home, a stranger into a friend. Gratitude makes sense of our past, brings peace for today, and creates a vision for tomorrow. 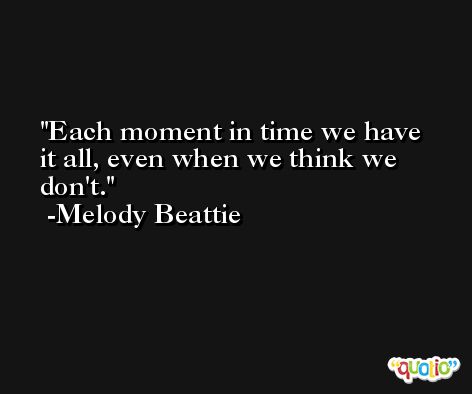