"Marilyn Ferguson" was an American author, editor and public speaker, best known for her 1980 book The Aquarian Conspiracy and its affiliation with the New Age Movement in popular culture.

A founding member of the Association of Humanistic Psychology, Ferguson published and edited the well-regarded science newsletter Brain/Mind Bulletin from 1975 to 1996. She eventually earned numerous honorary degrees, served on the board of directors of the Institute of Noetic Sciences, and befriended such diverse figures of influence as inventor and theorist Buckminster Fuller, spiritual author Ram Dass, Nobel Prize-winning chemist Ilya Prigogine and billionaire Ted Turner. Ferguson's work also influenced Vice President Al Gore, who participated in her informal network while a senator and later met with her in the White House.

If you enjoy these quotes, be sure to check out other famous writers! More Marilyn Ferguson on Wikipedia.

Ultimately we know deeply that the other side of fear is a freedom. 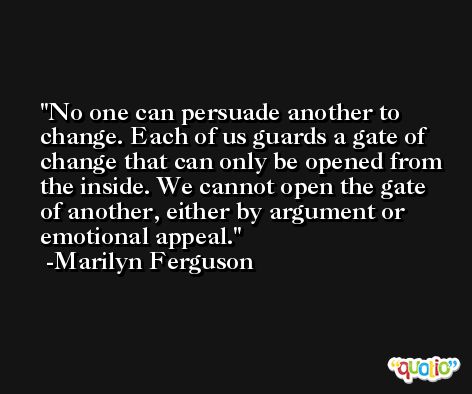 Fear is a question: What are you afraid of, and why? Just as the seed of health is in illness, because illness contains information, your fears are a treasure house of self-knowledge if you explore them.

Your past is not your potential. In any hour you can choose to liberate the future. 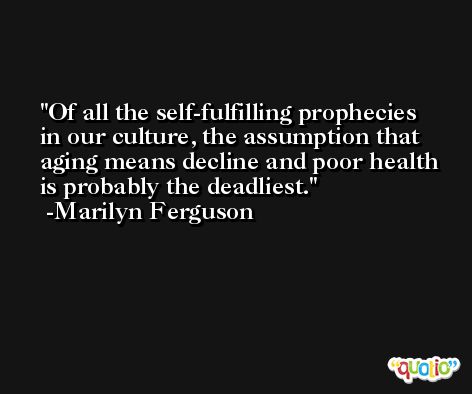 Over the years your bodies become walking autobiographies, telling friends and strangers alike of the minor and major stresses of your lives.

Making mental connections is our most crucial learning tool, the essence of human intelligence; to forge links; to go beyond the given; to see patterns, relationships, context. 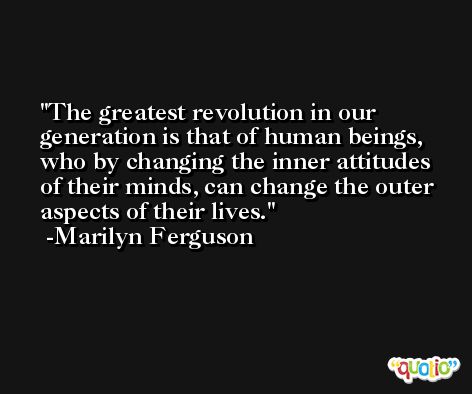 The brain's calculations do not require our conscious effort, only our attention and our openness to let the information through. Although the brain absorbs universes of information, little is admitted into normal consciousness.