"Karl Pearson" Fellow of the Royal Society/FRS was an influential English mathematician and biometrician. He has been credited with establishing the discipline

of mathematical statistics, and contributed significantly to the field of biometrics, meteorology, theories of social Darwinism and eugenics. A major proponent of eugenics, Pearson was also a protégé and biographer of Francis Galton/Sir Francis Galton.

In 1911 he founded the world's first university statistics department at University College London. A sesquicentenary#Latin-derived numerical names/sesquicentenary conference was held in London on 23 March 2007, to celebrate the 150th anniversary of his birth.

If you enjoy these quotes, be sure to check out other famous mathematicians! More Karl Pearson on Wikipedia.

Twenty years hence a curve or a symbol will be called as Pearson's, and nothing more remembered of the toil of the years. 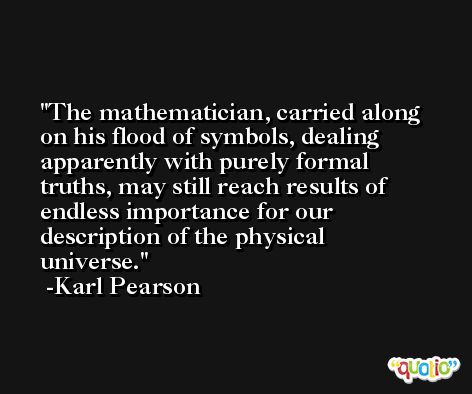 Thorough customers are our best customers. Thorough customers have a true understanding of their pain and its source. They make me prove how our product can deliver measurable ROI. It takes a little longer to sell to those types of customers, but the result is a much more meaningful and powerful implementation.