"Jimmy Breslin" is a Pulitzer Prize-winning American journalist and author. He currently writes a column for the New York Daily News' Sunday edition. He has written numerous novels, and columns of his have appeared regularly in various newspapers in his hometown of New York City. He served as a regular columnist for the Long Island, NY newspaper Newsday until his retirement on November 2, 2004, though he still publishes occasional pieces for the paper.

If you enjoy these quotes, be sure to check out other famous entertainers! More Jimmy Breslin on Wikipedia.

I busted out of the place in a hurry and went to a saloon and drank beer and said that for the rest of my life I'd never take a job in a place where you couldn't throw cigarette butts on the floor. I was hooked on this writing for newspapers and magazines.

The first funeral for Andrew Goodman was at night and it was a lot of work. To begin with they had to kill him.

The office of president is a bastardized thing, half royalty and half democracy, that nobody knows whether to genuflect or spit.

A job on a newspaper is a special thing. Every day you take something that you found out about, and you put it down and in a matter of hours it becomes a product. Not just a product like a can or something.

Politics, where fat, bald, disagreeable men, unable to be candidates themselves, teach a president how to act on a public stage. 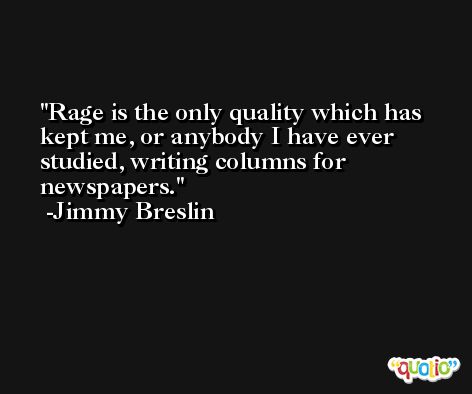