"Jan Morris", Commander of the Order of the British Empire/CBE, Fellow of the Royal Society of Literature/FRSL is a Welsh people/Welsh historian, author and travel writer. She is known particularly for the Pax Britannica trilogy (1968–78), a history of the British Empire, and for portraits of cities, notably Oxford, Venice, Trieste, Hong Kong, and New York City.

Born in England of an English people/English mother and Welsh father, Morris was educated at Lancing College, West Sussex, and Christ Church, Oxford, and considers herself Welsh people/Welsh. She is a trans woman and was published under her birth name until 1972, when she Transitioning (transgender)/transitioned from living as male to living as female.

If you enjoy these quotes, be sure to check out other famous writers! More Jan Morris on Wikipedia.

There it stands, with a toss of curls and a flounce of skirts, a Carmen among the cities. the last of the Middle Eastern fleshpots. a junction of intrigue and speculation.

Its origins are ancient but it burgeons with brash modernity, and it lounges upon its delectable shore, halfway between the Israelis and the Syrians, in a posture that no such city, at such a latitude, in such a moment of history, has any reasonable excuse for assuming. 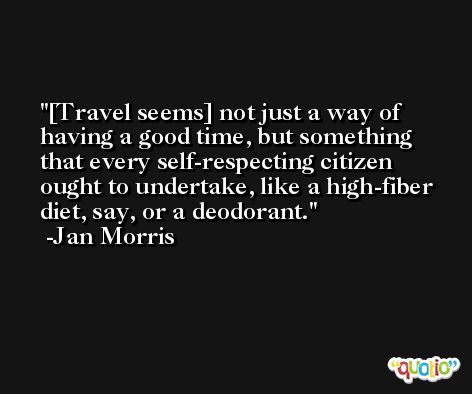 To me gender is not physical at all, but is altogether insubstantial. It is soul, perhaps, it is talent, it is taste, it is environment, it is how one feels, it is light and shade, it is inner music. . .

Travel, which was once either a necessity or an adventure, has become very largely a commodity, and from all sides we are persuaded into thinking that it is a social requirement, too. 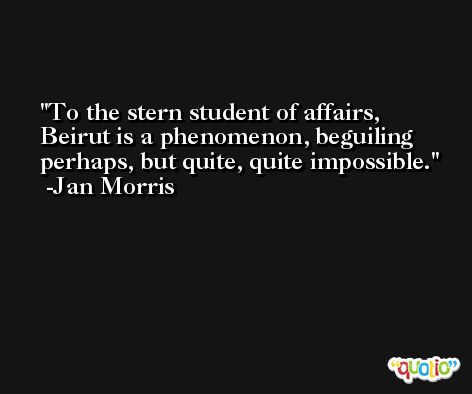 Indians love to reduce the prosaic to the mystic.

I told him everything and it was from him that I learned what my future would be. 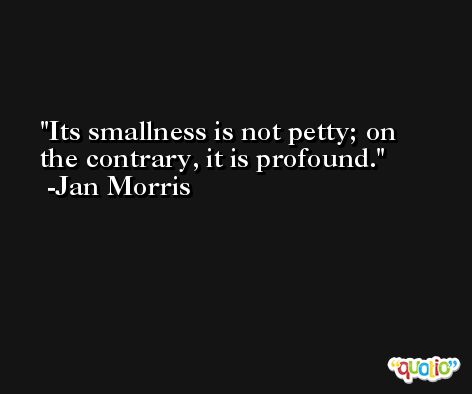