Packer is the son of the late media mogul Kerry Packer and grandson of Sir Frank Packer. He inherited control of the family company, Consolidated Press Holdings Limited, which controls investments in Crown Resorts, Ratpac Entertainment, Zhoapin Pty Ltd and other companies. He is the former executive chairman of Publishing and Broadcasting Limited (PBL) and Consolidated Media Holdings, which predominantly owned media interests across a range of platforms.

With an assessed net worth of 7.19 1,000,000,000 (number)/billion in 2014, Packer is ranked as the third richest Australian according to the BRW (magazine)/BRW magazine; having been the richest person in Australia during 2006 and 2007. Forbes (magazine)/Forbes Asia magazine assessed Packer's net worth at 6.6 billion in January 2014.

We believe that punters will appreciate having access to an exciting new 21st century product and that racing and sport throughout the country will also benefit. 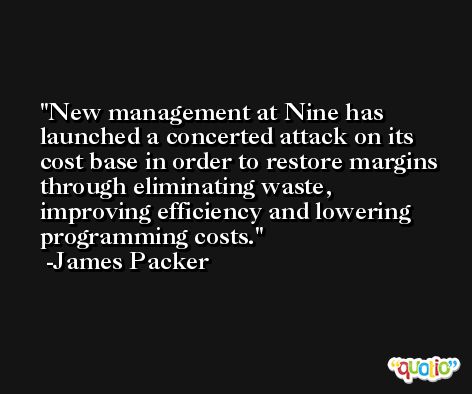 One of the rationales is that if you can have a number of divisions then occasionally one of them can miss a beat and the company as a whole can still grow strongly.

We're all going to get together to take those rights. We really don't want to do it but News are making us. 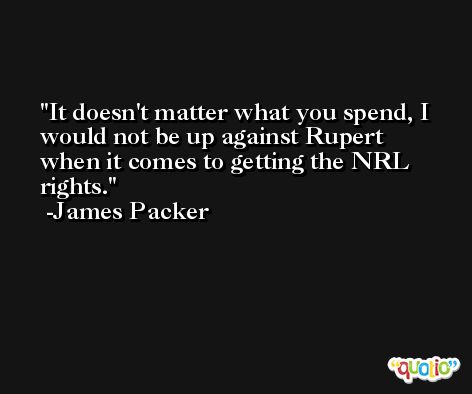 We are of the view that the expected returns from the integrated resort are insufficient to justify the higher projected capital costs of the project.

I've come to tell you that we're going to take the AFL. We're all going to get together to take those rights. We don't really want to do it but News are making us.