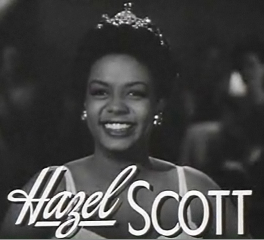 "Hazel Dorothy Scott" was an internationally known, American jazz and European classical music/classical pianist and singer; she also performed as herself in several films. She was prominent as a jazz singer throughout the 1930s and 1940s. In 1950, she became the first woman of color to have her own TV show, The Hazel Scott Show, featuring a variety of entertainment. To evade the political persecution of artists in the Joseph McCarthy/McCarthy era, Scott moved to Paris in the late 1950s and performed in France, not returning to the United States until 1967.

Born in Port of Spain, Hazel was taken at the age of four by her mother to New York. Recognized early as a musical prodigy, Scott was given scholarships from the age of eight to study at the Juilliard School. She began performing in a jazz band in her teens and was performing on radio at age 16.

If you enjoy these quotes, be sure to check out other famous musicians! More Hazel Scott on Wikipedia.

Who ever walked behind anyone to freedom? If we can't go hand in hand, I don't want to go.

There's a time when you have to explain to your children why they're born, and it's a marvelous thing if you know the reason by then. 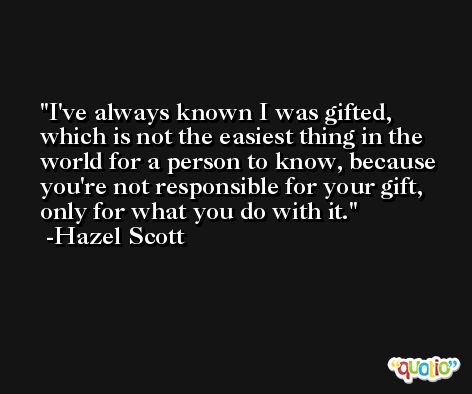 I have always respected everyone's religion. As I say, there is only one God and a lot of confused people.