"Hasim Sharif Rahman" is an American professional Boxing/boxer. Rahman is the former Lineal championship/Lineal, World Boxing Council/WBC, International Boxing Organization/IBO, & IBF heavyweight champion. He won the titles in 2001 with a shock defeat of Lennox Lewis by KO in the fifth round, subsequently losing them back to Lewis in the rematch, which was Rahman's first title defense.

Nicknamed "The Rock", Rahman began his professional career on December 3, 1994, at age 22.

This is like fighting a bully. When you stand up and fight back like you're not scared, the air goes right out of them. He'll be scared of me.

Once again, I'm going to prove those oddsmakers wrong, ... I love it when there's an obstacle this big. 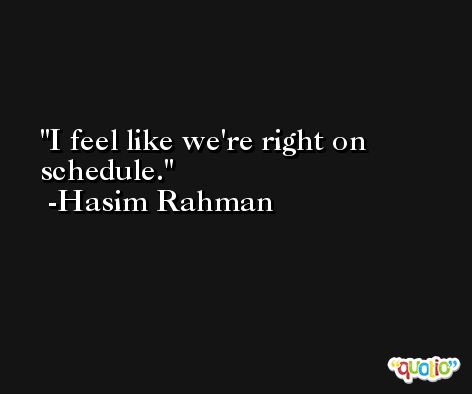 He knows when he fights me, along with the whipping comes a little trash-talking. I know one thing ? he won't be faking it November 12th.

I've been working and working for this fight. This is the end of the road for me if I can't beat Klitschko. If that happens, I'll congratulate the man and move on to another chapter in my life. 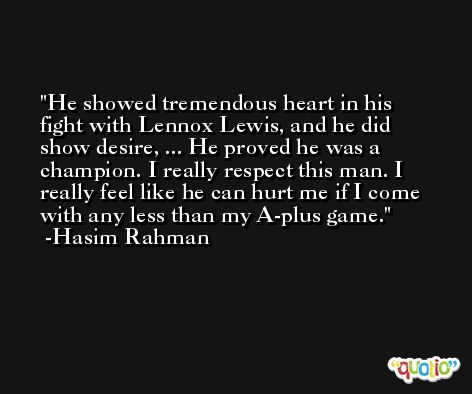 I suspect that. I saw him a week after the alleged injuries and he's walking around like he is today, ... I know one thing -- he won't be faking it November 12th.

[At the announcement, Rahman came to the podium wearing a chef's hat and holding a tray of food.] I just had some chicken Kiev prepared for him, because I am so happy he's not chicken anymore, ... We're finally getting in the ring. I'm glad he's all healed up. I just hope and pray he doesn't stub his toe or prick his finger before November 12th.