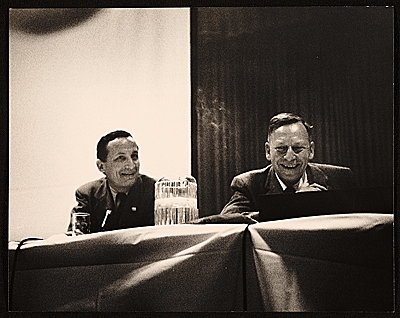 "Gregory Bateson" was an English anthropology/anthropologist, social sciences/social scientist, linguistics/linguist, visual anthropology/visual anthropologist, semiotics/semiotician and cybernetics/cyberneticist whose work intersected that of many other fields. In the 1940s he helped extend systems theory and cybernetics to the social and behavioral sciences. He spent the last decade of his life developing a "meta-science" of epistemology to bring together the various early forms of systems theory developing in different fields of science. His writings include Steps to an Ecology of Mind (1972) and Mind and Nature (1979). Angels Fear (published posthumously in 1987) was co-authored by his daughter Mary Catherine Bateson.

Bateson was born in Grantchester in Cambridgeshire, England on 9 May 1904. He was the third and youngest son of [Caroline] Beatrice Durham and the distinguished geneticist William Bateson. He was named Gregory after Gregor Mendel, the Austrian monk who founded the modern science of genetics.

If you enjoy these quotes, be sure to check out other famous scientists! More Gregory Bateson on Wikipedia.

In the transmission of human culture, people always attempt to replicate, to pass on to the next generation the skills and values of the parents, but the attempt always fails because cultural transmission is geared to learning, not DNA.

Every move we make in fear of the next war in fact hastens it.