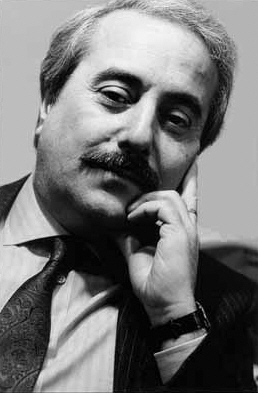 "Giovanni Falcone" was an Italy/Italian prosecuting magistrate. From his office in the Palace of Justice in Palermo (Sicily), he spent most of his professional life trying to overthrow the power of the Sicilian Mafia. After a long and distinguished career, culminating in the famous Maxi Trial in 1986-1987, he was killed by the Corleonesi Mafia in May 1992, on the motorway near the town of Capaci.

His life parallels that of his close friend Paolo Borsellino. They both spent their early years in the same neighbourhood in Palermo. And though many of their childhood friends grew up in the Mafia background, both men fought on the other side of the war as prosecuting magistrates. They were both killed in 1992, a few months apart. In recognition of their tireless effort and sacrifice during the anti-mafia trials, they were both awarded the Italian "Medaglia d'oro al valore civile" (Gold medal for civil valor). They were also named as heroes of the last 60 years in the November 13, 2006, issue of Time Magazine.

If you enjoy these quotes, be sure to check out other famous judges! More Giovanni Falcone on Wikipedia.