"Gilbert Ryle" was a British philosopher. He was a representative of the generation of British ordinary language philosophy/ordinary language philosophers who shared Ludwig Wittgenstein/Wittgenstein's approach to philosophical problems, and is principally known for his critique of Cartesian dualism, for which he coined the phrase "the ghost in the machine." Some of his ideas in the philosophy of mind have been referred to as "behaviourist." Ryle's best known book is The Concept of Mind (1949), in which he writes that the "general trend of this book will undoubtedly, and harmlessly, be stigmatised as 'behaviourist'." Ryle, having engaged in detailed study of the key works of Bernard Bolzano, Franz Brentano, Alexius Meinong, Edmund Husserl, and Martin Heidegger, himself suggested instead that the book "could be described as a sustained essay in Phenomenology (philosophy)/phenomenology, if you are at home with that label."

If you enjoy these quotes, be sure to check out other famous philosophers! More Gilbert Ryle on Wikipedia.

To explode a myth is accordingly not to deny the facts but to re-allocate them.

Such in outline is the official theory. I shall often speak of it, with deliberate abusiveness, as 'the dogma of the Ghost in the Machine'. 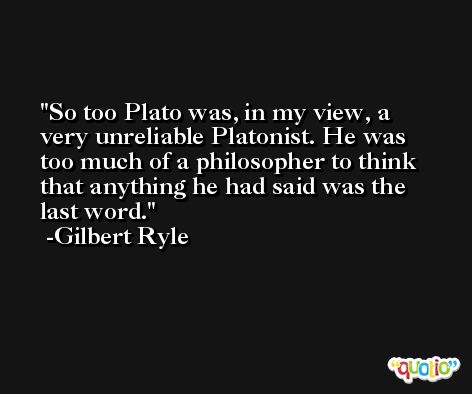 The dogma of the Ghost in the Machine.