"George Shinn" is the former owner of the Charlotte Hornets/Charlotte/New Orleans Hornets as well the Charlotte Knights and Gastonia Rangers minor league baseball teams along with the Raleigh–Durham Skyhawks of the World League of American Football. He purchased the Hornets for $32,500,000 in 1987. In 1997, he lost his bid for a National Hockey League expansion franchise to be called the Hampton Roads Rhinos.

But we've got to remember the economics have to be there to support it.

It's not even real. It's unreal what they're going through. I want to try to give them hope and to let them know our goal is to come back. 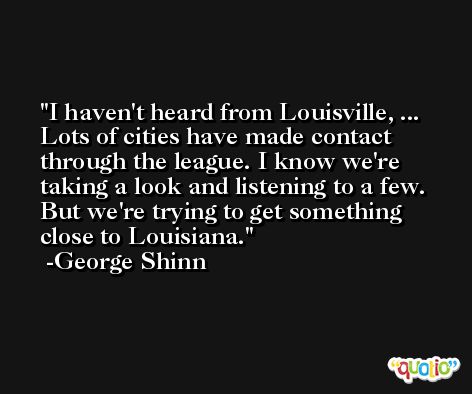 The thing everybody's got to remember is our goal is simple. We want to play in New Orleans. That's our home. But we can't. We can't come back even if the facility was clean because there's nobody else there. The city will come back. We don't know how long it will take, therefore we've got to find a temporary home.

This whole thing is somewhat bittersweet. 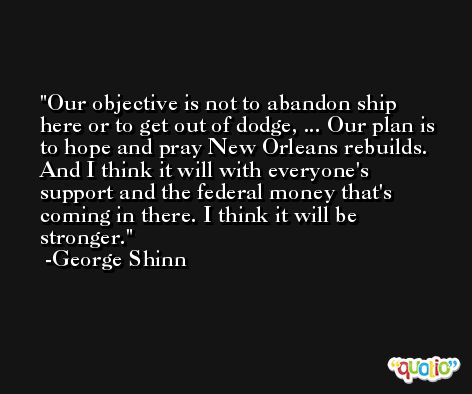 When we come back and what we do is a real good question. We're looking at Oklahoma City and here in Baton Rouge. Playing in the Arena has good and bad possibilities. If we could do it in a way that we'd have a full crowd, it would be ecstatic. If we have 1,500 people, it would be horrible. That might send a signal there was no hope there.