"Edward Seymour" may refer to:

*Edward Seymour, 1st Duke of Somerset, Lord Protector of England (1547-49), during the minority of his nephew, Edward VI of England

*Edward Seymour, 1st Earl of Hertford, son of the above

*Sir Edward Seymour, of Berry Pomeroy, Sheriff of Devon, son of the first

*Sir Edward Seymour, 4th Baronet (1633–1708), an English statesman who served as Treasurer of the Navy during the First Danby Ministry

It's more of a parody. We didn't start that way, but the way we write and think, it turns into a comedy.

I don't even know if it's this state, but if you're making a horror movie with some nudity, it's a big deal. 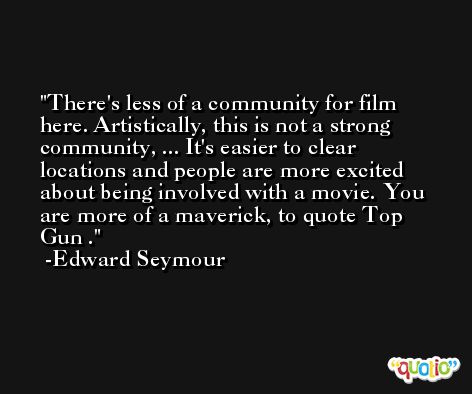 People in New York think Connecticut is five hours away.

Isn't that how B movies became popular? ... They would do things that regular cinema didn't.