"David Barrow" is the mayor of Richmond Hill, Ontario, Canada.

Barrow was born and raised in Richmond Hill and graduate of Ryerson Polytechnic Institute. He first entered elected office as Ward 4 councillor from 1978 to 1985 and York Regional Councillor from 1997 to 2006. Barrow was first elected as mayor in 2006. following the retirement of longtime mayor William F. Bell (mayor)/William F. Bell.

During his hiatus from public life, Barrow ran his family business following the death of his father Elgin Barrow.

Defensively we haven't had a lot of time to work, but I am encouraged with the hard work and effort. When we work on defensive skills, they have worked hard. We have better team chemistry; they all get along. Last year it was an individual thing.

The bulk of our (innings) came from the two kids that moved away. Between the two of them, they were a big part of the roster. 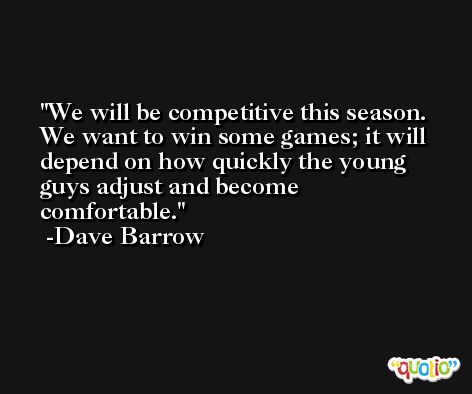