Although Young had emerged from the far left element in Detroit, he moved to the right after his election as mayor. He called an ideological truce and gained widespread support from the city's business leaders. The new mayor was energetic in the construction of the Joe Louis Arena, and upgrading the city's mediocre mass transit system. Highly controversial was his assistance to General Motors Corporation/General Motors to build its new "Poletown" plant at the site of the former Detroit/Hamtramck Assembly/Dodge Main plant, which involved evicting many long-time residents. Rich argues that he pulled money out of the neighborhood to rehabilitate the downtown business district, because "there were no other options."

If you enjoy these quotes, be sure to check out other famous politicians! More Coleman Young on Wikipedia.

We need to dream big dreams, propose grandiose means if we are to recapture the excitement, the vibrancy, and pride we once had.

I've learned over a period of years there are setbacks when you come up against the immovable object; sometimes the object doesn't move. 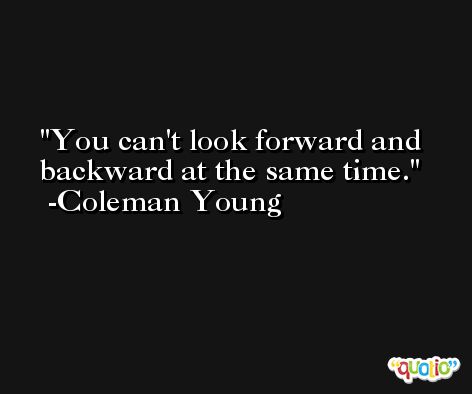 There is no brilliant single stroke that is going to transform the water into wine or straw into gold.