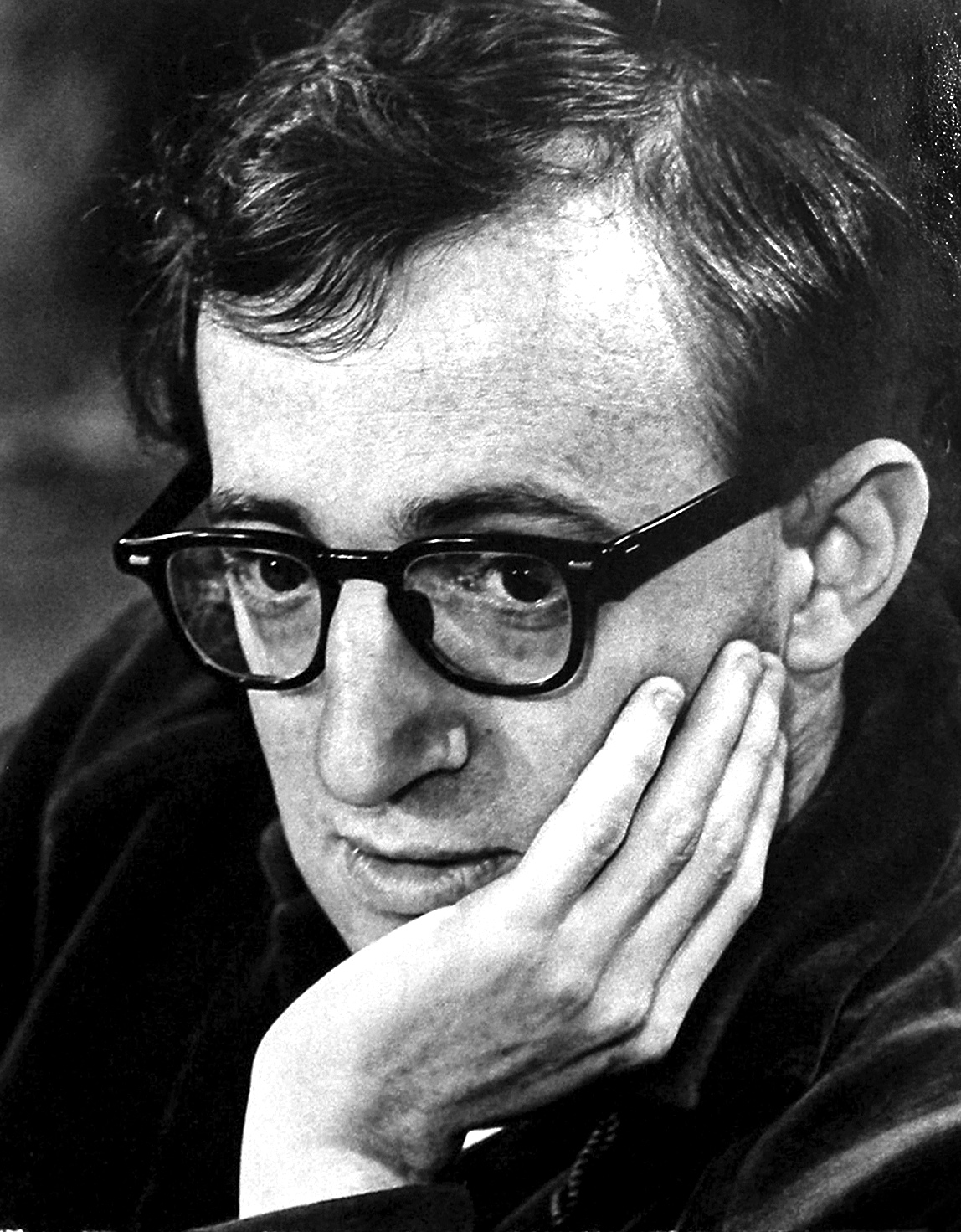 He worked as a comedy writer in the 1950s, writing jokes and scripts for television and publishing several books of short humor pieces. In the early 1960s, Allen began performing as a stand-up comic, emphasizing monologues rather than traditional jokes. As a comic, he developed the persona of an insecure, intellectual, fretful wikt:nebbish/nebbish, which he maintains is quite different from his real-life personality. In 2004, Comedy Central ranked Allen in fourth place on a list of the 100 greatest stand-up comics, while a UK survey ranked Allen as the third greatest comedian.

By the mid-1960s Allen was writing and directing films, first specializing in slapstick comedies before moving into dramatic material influenced by European art cinema during the 1970s. He is often identified as part of the New Hollywood wave of filmmakers of the mid-1960s to late '70s. Allen often stars in his films, typically in the persona he developed as a standup. Some best-known of his over 40 films are Annie Hall (1977), Manhattan (film)/Manhattan (1979), Hannah and Her Sisters (1986), and Midnight in Paris (2011). Critic Roger Ebert described Allen as "a treasure of the cinema."

If you enjoy these quotes, be sure to check out other famous directors! More Woody Allen on Wikipedia.

Eternity is a long time, especially towards the end. 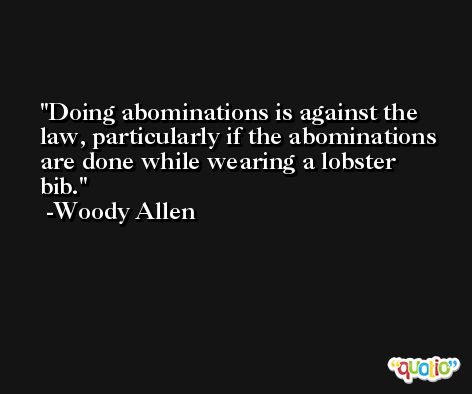 Life is divided into the horrible and the miserable.

It seemed the world was divided into good and bad people. The good ones slept better... while the bad ones seemed to enjoy the waking hours much more. 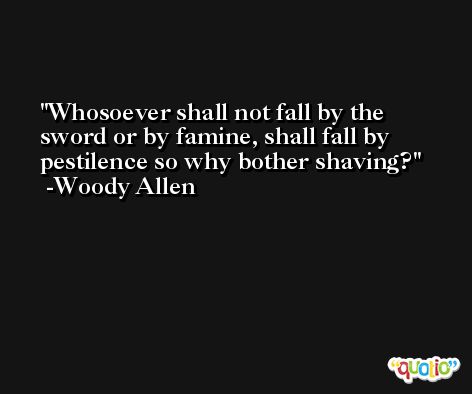 I will not eat oysters. I want my food dead- not sick, not wounded - dead.

The lion and the calf shall lie down together but the calf won't get much sleep. 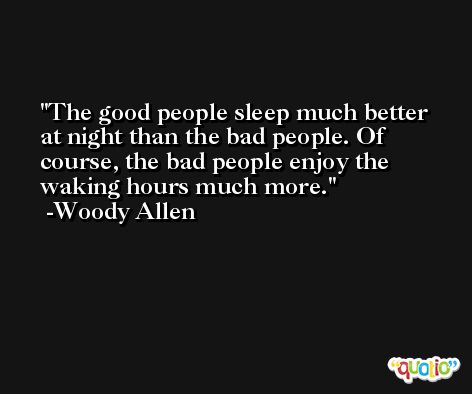 Miscellaneous methods of Civil Disobedience: Standing in front of City Hall and chanting the word 'pudding' until one's demands are met. Phoning members of the 'establishment' and singing 'Bess, You Is My Woman Now' into the phone. Dressing as a policeman and then skipping. Pretending to be an artichoke but punching people as they pass. 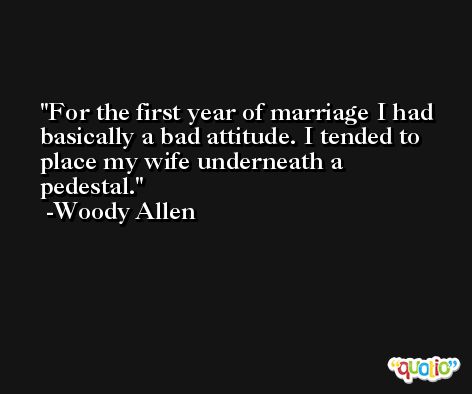 Interestingly, according to modern astronomers, space is finite. This is a very comforting thought- particularly for people who can never remember where they have left things.

When I was kidnapped, my parents snapped into action. They rented out my room. I took a speed-reading course and read War and Peace in twenty minutes. It involves Russia. 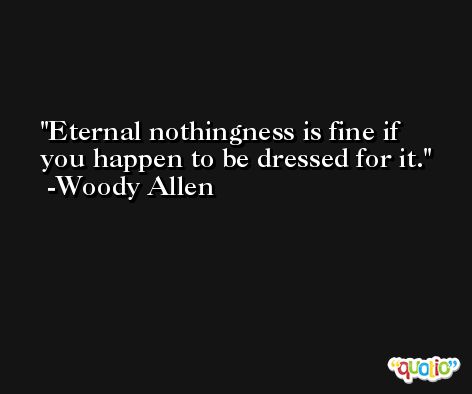 There are worse things in life than death. Have you ever spent an evening with an insurance salesman? 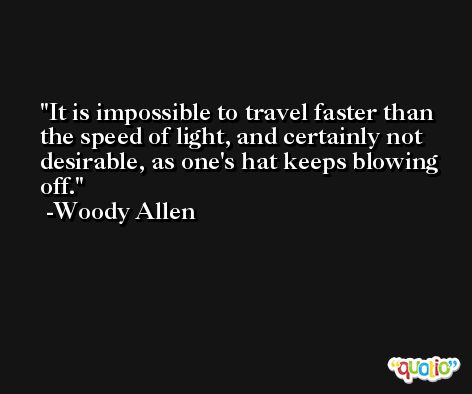 I tended to place my wife under a pedestal.

The only difference between sex and death is, with death you can do it alone and nobody's going to make fun of you. 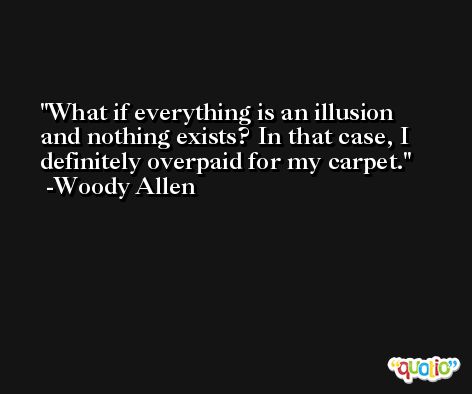 I hate reality but it's still the best place to get a good steak.

His lack of education is more than compensated for by his keenly developed moral bankruptcy. 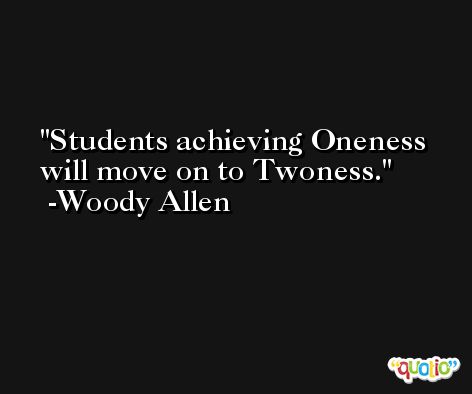 To you I'm an atheist; to God, I'm the Loyal Opposition.

Life is full of misery, loneliness, and suffering - and it's all over much too soon. 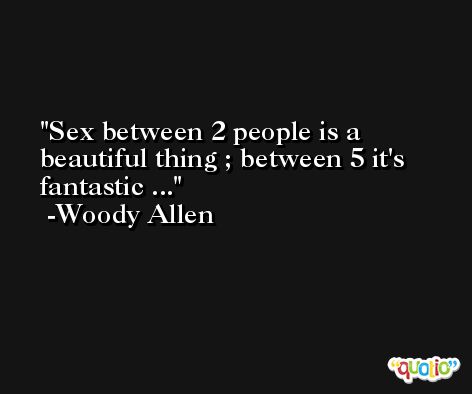