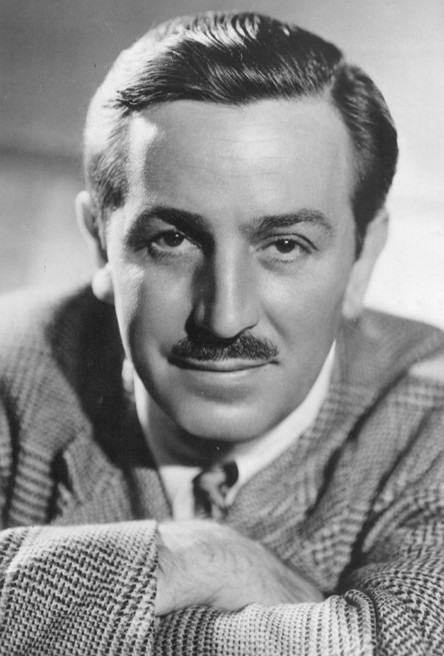 "Walter Elias" ""Walt"" "Disney" (December 5, 1901 – December 15, 1966) was an American business magnate, cartoonist, animator, voice acting/voice actor, and film producer. As a prominent figure within the Modern animation in the United States/American animation industry and throughout the world, he is regarded as a cultural icon, known for his influence and contributions to Show business/entertainment during the 20th century. As a Hollywood business mogul, he and his brother Roy O. Disney co-founded The Walt Disney Company.

As an animator and entrepreneur, Disney was particularly noted as a filmmaker and a popular showman, as well as an innovator in animation and theme park design. He and his staff created numerous fictional characters including Mickey Mouse, Donald Duck, and Goofy. Disney himself was the original voice for Mickey. During his lifetime, he received four honorary Academy Awards and won 22 Academy Awards from a total of 59 nominations, including a record of four in one year, giving him List of Academy Awards for Walt Disney/more awards and nominations than any other individual in history. Disney also won seven Emmy Awards and gave his name to the Disneyland and Walt Disney World Resort theme parks in the U.S., as well as the international resorts, Tokyo Disney Resort, Disneyland Paris, and Hong Kong Disneyland.

If you enjoy these quotes, be sure to check out other famous cartoonists! More Walt Disney on Wikipedia.

If you can dream it, you can do it.

If you can dream it, you can do it. Always remember that this whole thing was started with a dream and a mouse.

I love Mickey Mouse more than any woman I've ever known.

Animation can explain whatever the mind of man can conceive.

All of our dreams can come true, if we have the courage to pursue them.

Our greatest natural resource is the minds of our children.

I dream, I test my dreams against my beliefs, I dare to take risks, and I execute my vision to make those dreams come true.

A person should set his goals as early as he can and devote all his energy and talent to getting there. With enough effort, he may achieve it. Or he may find something that is even more rewarding. But in the end, no matter what the outcome, he will know he has been alive.

All the adversity I've had in my life, all my troubles and obstacles, have strengthened me... You may not realize it when it happens, but a kick in the teeth may be the best thing in the world for you.

When you're curious, you find lots of interesting things to do.

When you believe in a thing, believe in it all the way, implicitly and unquestionable.

Girls bored me - they still do. I love Mickey Mouse more than any woman I've ever known.

It's kind of fun to do the impossible.