"Tony Rizzo" is a former politician in Ontario, Canada. He was a Ontario New Democratic Party/New Democratic member of the Legislative Assembly of Ontario from 1990 to 1995 who represented the central Toronto riding of Oakwood (electoral district)/Oakwood. He was also an alderman for the city of York, Ontario/York from 1982 to 1990.

Enterprises can't just suddenly turn over hardware to employees under that sort of scenario, so they're going to figure out how to create a secure environment. That'll be the biggest stumbling block for a lot of enterprises.

It's at least another 18 months until this becomes a viable market, but it will definitely happen. Right now it's all about the consumer dollars. Everyone is putting their first effort there. 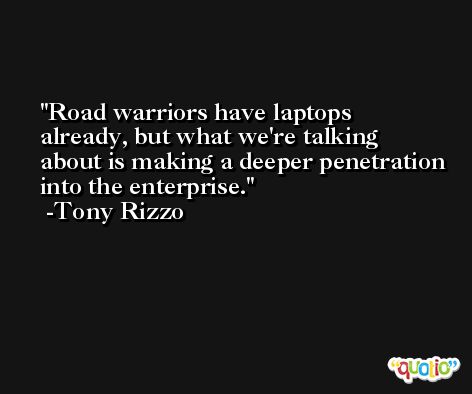 The bottom line is really that although you can never convince a CTO or CIO that security is as good as it needs to be, the truth of the matter is these vendors can pretty much deliver a high level of security if you need it. Enterprises will have to come to grips with that and realize that they can in fact provide good enough security.