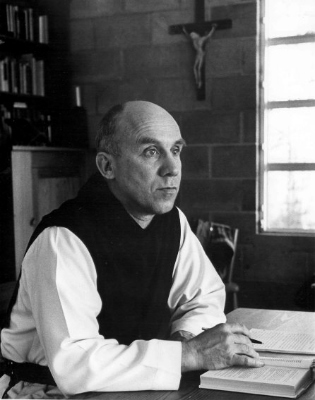 "Thomas Merton", Trappists/O.C.S.O. was an American Roman Catholic Church/Catholic writer and Christian mysticism/mystic. A Trappist monk of the The Abbey of Our Lady of Gethsemani/Abbey of Gethsemani, Kentucky, he was a poet, social activism/social activist, and student of comparative religion. In 1949, he was ordained to the priesthood and given the name Father Louis.

Merton wrote more than 70 books, mostly on spirituality, social justice and a quiet Christian pacifism/pacifism, as well as scores of essays and reviews. Among Merton's most enduring works is his bestselling autobiography The Seven Storey Mountain (1948), which sent scores of World War II veterans, students, and even teenagers flocking to monasteries across the US, and was also featured in National Review"s list of the 100 best non-fiction books of the century. Merton was a keen proponent of interfaith understanding. He pioneered dialogue with prominent Asian spiritual figures, including the Tenzin Gyatso, 14th Dalai Lama/Dalai Lama, the Japanese writer Daisetz Teitaro Suzuki/D.T. Suzuki, the Thai Buddhist monk Buddhadasa, and the Vietnamese monk Thich Nhat Hanh, and authored books on Zen/Zen Buddhism and Taoism. In the years since his death, Merton has been the subject of List of works about Thomas Merton#Biographies/several biographies.

If you enjoy these quotes, be sure to check out other famous writers! More Thomas Merton on Wikipedia.

The truth that many people never understand, until it is too late, is that the more you try to avoid suffering the more you suffer because smaller and more insignificant things begin to torture you in proportion to your fear of being hurt.

We must make the choices that enable us to fulfill the deepest capacities of our real selves.

The first step toward finding God, Who is Truth, is to discover the truth about myself: and if I have been in error, this first step to truth is the discovery of my error.

The biggest human temptation is to settle for too little.

Love is our true destiny. We do not find the meaning of life by ourselves alone-we find it with another.

The least of the work of learning is done in the classroom.

Propaganda makes up our minds for us, but in such a way that it leaves us the sense of pride and satisfaction of men who have made up their own minds. And in the last analysis, propaganda achieves this effect because we want it to. This is one of the few real pleasures left to modern man: this illusion that he is thinking for himself when, in fact, someone else is doing his thinking for him.

The least of learning is done in the classrooms.

Art enables us to find ourselves and lose ourselves at the same time.

We are so obsessed with doing that we have no time and no imagination left for being. As a result, men are valued not for what they are but for what they do or what they have - for their usefulness.

We have what we seek, it is there all the time, and if we give it time, it will make itself known to us.